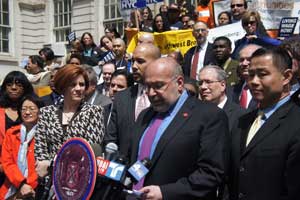 The campaign spawned a highly visible and vocal movement that engaged thousands of New Yorkers and led to overwhelming support for the legislation across the political spectrum—74% of voters overall, according to a recent Quinnipiac University poll, with 60 % percent of Republicans saying it is government’s responsibility to ensure workers are paid a decent wage.

Under the terms of the legislation, any private development project directly accepting $1 million or more in taxpayer subsidies must pay employees a living wage of $10/hour with supplemental health benefits or $11.50/hour without benefits. The Fair Wages for New Yorkers Act, co-sponsored by Council members Oliver Koppel and Annabel Palma, reforms the city’s taxpayer-funded economic development programs, which have failed to create good jobs for New Yorkers over the past decade because, until now, they lacked enforceable wage standards of any kind.

After billions of public dollars spent on poverty-wage jobs, this legislation will put an end to that costly failure and fundamentally transform the city’s approach to job creation and economic development. At a time of rising poverty and strained public resources, the living wage legislation is an act of fiscal responsibility and fundamental fairness: it establishes strong wage standards for jobs created via subsidized economic development projects, giving low-wage New Yorkers and taxpayers alike a boost. It will cover projects overseen by the largest urban economic development agency in the United States, New York City’s Economic Development Corporation (EDC), and will have a far-reaching impact on thousands of future jobs in the city.

“We are proud to have played a lead role in building the living wage movement and shaping this legislation. The city needs to create higher-wage jobs, not poverty-wage jobs. Passage of this legislation is a major triumph for working people, for democracy, and for our city. It is a significant step toward reducing inequality and poverty in our city,” said Stuart Appelbaum, President of the Retail, Wholesale and Department Store Union (RWDSU, UFCW).

“For too long, major development projects have taken heavily from the taxpayer’s wallets while providing only poverty-wage jobs. The ‘Fair Wages for New Yorkers’ Act will guarantee that, when major developers take city dollars they will do right by their employees and taxpayers. “This legislation will fundamentally improve the way business is conducted here,” said Bronx Borough President Ruben Diaz Jr.

“I am pleased with the passage of the living wage bill. This legislation will benefit the city by reducing dependency on government programs increasing consumer spending and adding to our tax revenue,” said City Council Member G. Oliver Koppell, lead sponsor of the bill.

“It’s been a long journey to get here, but with the help of all of our partners, I believe we have succeeded in producing landmark legislation that will immediately help to improve the lives of hundreds of working New Yorkers,” said Council Member Annabel Palma, co-sponsor of the bill with Council Member Oliver Koppell.