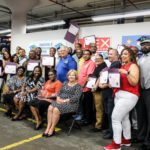 One day later, on Aug. 1, 2018, the 19 graduates started in their new higher paying titles in MOW as Transit Electrical Helper.

But for the past six months, the group of former Cleaners, Traffic Checkers and TPPA’s, attended the intense 900-hour program at the region’s top trade school. During the training, the candidates are paid their full transit salary. After graduating, they are guaranteed a budgeted transit position, and will spend the next three years in an apprentice status before being elevated to full journeyman.

Local 100 President Tony Utano praised the graduates for their efforts and joked, “now that you completed this program, you’re going to be getting a lot of calls from your relatives, saying ‘hey my light is out, hey, I need a new switch installed.’”

Utano said that the entire union is looking to the graduates to be successful in their new roles. “Your success,” said Utano, “will enable us to grow the program, so that others can receive the same opportunity as you.” He said that the next class in the fall with have 34 candidates. “This is a good thing,” said Utano, “this is what unions do.”