Some pundits are proclaiming the economy is growing as U.S. exports recently exceeded imports. But at the Murphy Institute on Thursday, April 13, panelists explained that the major driver of growth in the country and in the City particularly is the retail industry. While retail is a leading industry in job creation, retail workers, however, earn a median income that cannot sustain a family in New York.

The “Discounted Jobs: Leading Experts to Call for Improved Jobs in Retail Industry,” forum coincided with the release of the report,“Discounted Jobs: How Retailers Sell Workers Short,” produced by Stephanie Luce, a professor at the Murphy Institute and Naoki Fujita of the Retail Action Project, an organization of retail workers working to achieve better workplace standards.

The authors, in conjunction with RAP volunteers, surveyed 436 retail workers in a range of retail environments from 99 cents stores to high-end Fifth Avenue fashion stores across the five boroughs. Of that group, 59 percent were female workers.

Luce highlighted some of the report’s key findings. “We continue to be shocked at the low wages. Workers with an associate’s degree earn only a gross pay of $16,640 annually while working 32 hours per week.”

She added, “Only 29 percent of full-time retail workers receive health care benefits from their employers, while about 70 percent rely on government social programs,” which Luce estimates represents about 60,000 workers, costing City taxpayers about $50 million because employers are shifting health costs to consumers.

Other eye-opening data shows the astounding disparity of work experiences and pay standards between women and men, and among Black, White and Latino workers. For example, Luce said during her presentation that 77 percent of Latina women are earning less than $10 an hour in retail.

The report also reveals that where workers work affects their pay. In Manhattan, a retail worker’s median pay is $10 an hour, but only $8.00 an hour in the Bronx. Overall, the median wage for retail workers is $9.50 an hour.

Dorian Warren, an assistant professor at Columbia University, explained that the importance of the retail industry to the City’s and nation’s economy cannot be understated because it is at the heart of the transition from an industrial/manufacturing-based economy to a service-sector economy characterized by low wages.

He noted just as organizing was required to increase the pay of industrial workers 70 years ago, action must be taken to increase retail workers’ pay so that they can enter the middle class and enjoy certain workplace protections.

The most compelling finding in the report for Warren is that “Latinos with two years of retail experience make less than white workers with less than six months of work experience.” He contributes this disparity to continuing discrimination by employers who discriminate in areas of hiring, job channeling (work assignments) and promotions.

Stuart Appelbaum, president of the Retail, Wholesale and Department Store Union, said, “The quality of these jobs are not what we want them to be. Retail workers who are members of RWDSU have good retail jobs that provide careers.” 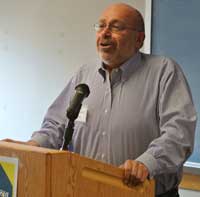 He added, “Nothing changes the lives of workers more profoundly than union representation and a union contract.”

He cited how RWDSU’s previous organizing efforts at the clothing store H&M have led to posting of work schedules one week in advance, rather than at the last minute, and that the schedules cannot be changed without first notifying the employees.

At Macy*s last year, the union achieved higher wages and lower health care costs for 4,000 workers. And at three Shoe Mania stores, workers will now receive guaranteed commission each year of the contract, up to 8 percent straight commission.

As a result of these recent victories, the Retail Action Project and RWDSU’s goal is to change industry standards going forward. Gustavo Rivera, a Democratic State Senator of the 33rd Senate District, said that government policy will also have to play an important role in changing the industry, such as an increase in the state’s minimum wage.

He noted that there will be an upcoming forum in Albany to discuss the need for an increased minimum wage.