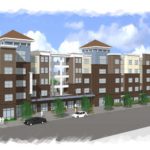 for both new construction, with 10,099 new homes financed, as well as for preservation, with 24,061 apartments.

The total number of homes financed to date under the City’s Housing New York plan to nearly 122,000 apartments. Nearly 85 percent of all homes financed through the Mayor’s housing plan are affordable to low-income New Yorkers, of which more than 40 percent will serve families earning less than $46,950.

“Family by family, building by building, we’re giving people the security of knowing they can stay in the city they love. Last year, we created and preserved affordable housing that will reach 85,000 New Yorkers – enough to fill an entire neighborhood the size of Flushing. And we’re just warming up. This year, we’ll launch a new Mayor’s Office to Protect Tenants that will fight for residents in every community,” said Mayor Bill de Blasio.

The City advanced new construction on large public sites in rezoning and urban renewal areas, including major developments at Hunter’s Point South in Long Island City, Queens, on 125th Street in East Harlem, and a multi-phase development in Coney Island, Brooklyn. Along with building affordable housing, protecting tenants is a core part of the City’s strategy to expand affordable housing. The Mayor’s Office to Protect Tenants is closely engaging with tenants and advocates. In addition, city  legislation will increase financial penalties against bad landlords and seize buildings from neglectful owners.

“In New York City, we’re preserving and building affordable housing at rates that far outpace any other city and even most states. We’ve created a powerful machine that will continue to produce results for years to come, so that even as our city grows, New Yorkers will be able to stay in the neighborhoods they helped build,” said Deputy Mayor for Housing and Economic Development Alicia Glen.

“Creating and preserving affordable housing is integral to the viability of low-income and working-class communities, like the ones I represent,” said Council Member Diana Ayala.”