JEFFERSON CITY, Mo.—Voters in Missouri rejected a state law banning the union shop by a two-to-one 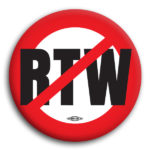 margin in the Aug. 7 primary.

Proposition A, which would have allowed the so-called “right to work” law enacted last year to go into effect, lost by almost 500,000 votes out of 1.4 million cast. The measure, which would have let employees refuse to pay dues or fees to the union representing them, got only 32.5% of the vote.

“It’s a truly historic moment,” Missouri AFL-CIO President Mike Louis said in a statement. He credited the “thousands of hardworking men and women” who “knocked on more than 800,000 doors, made more than 1 million phone calls, and talked to working people on more than 1,000 different job sites.”

National AFL-CIO President Rich Trumka said “the defeat of this poisonous anti-worker legislation” was “the latest sign of a true groundswell.”

The repeal vote stops the wave of “right to work” laws that swept over the Midwest and Ohio Valley in the past seven years, with Wisconsin, Michigan, Indiana, Kentucky, and West Virginia also enacting them. The margin was significantly larger than when Missouri voters rejected a constitutional amendment to ban the union shop in 1978.

Opposition to the proposition was strongest in urban areas. It lost by 88-12% in the city of St. Louis, 73-27% in its more populous immediate suburbs, and 83-17% in Kansas City. But many rural areas also voted no by margins of 2-1 or higher. The measure carried only 14 of the state’s 114 counties, most in rural areas along the Arkansas border.

“In every corner of the state, voters rebuked the efforts of powerful, out-of-state corporate interests and dark money to control the future of Missouri’s economy,” the We Are Missouri coalition said in a statement.

Former Gov. Eric Greitens, who resigned in May after being accused of sexual assault and blackmail by a woman he’d had an affair with, made banning the union shop a top priority in his 2016 campaign. He pushed the bill through the overwhelmingly Republican legislature within five weeks after he took office. A union-led coalition responded by collecting more than 310,000 petition signatures, about three times the amount needed, to put repeal on the ballot. That also prevented the law from going into effect last August.

The repeal victory came despite the legislature moving the vote from the general election to the primary—ostensibly so businesses wouldn’t have to endure the uncertainty of waiting until November to know if the law was going to go into effect. That change meant the vote would have lower turnout, and union get-out-the-vote efforts wouldn’t have the side effect of aiding Democrats such as Sen. Claire McCaskill.

It also came despite the way Proposition A was written by Secretary of State John R. Ashcroft’s office. It described the law as prohibiting “the forced membership in a labor organization (union) or forced payments of dues” and said a yes vote would “make any activity which violates employees’ rights provided by the bill illegal.”

Missouri Chamber of Commerce and Industry President Dan Mehan blamed “union bosses” for outspending supporters of the law, saying they’d “sent money to Missouri because they were fearful of losing out if Missourians had the power to stop their paychecks from being siphoned to pad union coffers and play politics.”

Unions, including the national AFL-CIO, the International Brotherhood of Electrical Workers, the Teamsters, and the United Food & Commercial Workers, raised about $20 million for the repeal campaign. Supporters of the law raised about one-third as much, including contributions from Greitens’ dark-money outfit, A New Missouri, and Joplin multimillionaire David Humphreys, who’d spent more than $1 million in the 2016 election to defeat legislators who’d voted to sustain outgoing Gov. Jay Nixon’s veto of a union-shop ban.

Mehan’s statement added that he didn’t want to concede hope, because “the future of our state’s economy on the line.” But he told the St. Louis Post-Dispatch that making another attempt to pass a similar law depended on “seeing where the political will is.”

“We know from the experiences of 27 states, including many of Missouri’s neighbors, that ‘right to work’ laws don’t spur investment or create jobs,” the Economic Policy Institute said in a statement. “They do, however, undercut unions, lower wages, and weaken workers’ bargaining power. In fact, that is the whole reason for the enormous corporate interest in ‘right to work’…. By letting people get the benefits of union representation at no cost, ‘right to work’ undercuts unions’ ability to negotiate for better wages, benefits, and working conditions.”