LaborPress presented a conference on retirement at EmblemHealth on Thursday, April 5 to an audience comprised of financial experts, pension managers, labor lawyers, accountants and politicians.

EmblemHealth, which has been helping New York’s working families by offering comprehensive health insurance, through its companies Group Health Incorporated (GHI) and HIP Health Plan of New York (HIP) for the past 70 years, hosted the “Retirement: Securing our Future” conference at its headquarters on 55 Water Street.

Salvatore J. Armao, President, Armao, Costa & Ricciardi, CPAs, told the audience that “we are in a retirement crisis. A lot of pension funds are in danger of going out of business.”

He added, “Right now, millions of baby boomers are readying for retirement. Over the next decade, they’ll reach retirement at greater numbers than previous generations. But most of them, 53 percent, don’t feel comfortable about their retirement outlook.”

Armao cited a 2007 AARP survey, which revealed that working individuals 55 years and older will grow five times faster than the overall workforce, putting enormous strain on the Social Security system to pay benefits.

“This year, Social Security will pay more in funds than it collects in taxes,” Armao said.

However, certain politicians might disagree with Armao. Bernie Sanders (I-VT) has consistently proclaimed that since it was established 75 years ago, “Social Security has paid every nickel it owed to every eligible American, in good times and bad.”

“We have to do something,” Armao challenged the audience.

A politician like Sanders might argue that corporations should reinstate defined-benefit pension plans to increase the majority of Americans’ guaranteed retirement security. But Armao cited the importance of the Financial Accounting Standards Board’s new multi-employer pension plan disclosure requirements, which have yet to be finalized.

“Whereas previously only the amount of money contributed was disclosed, the enhanced disclosures would contribute to more transparency and help to identify any potential liabilities,” said Armao.

Vincent Pitta, founding and managing partner of Pitta & Giblin LLP, told the audience that one way to ensure the retirement security of hundreds of thousands of State and City union members is for private and public pension funds to invest in infrastructure projects 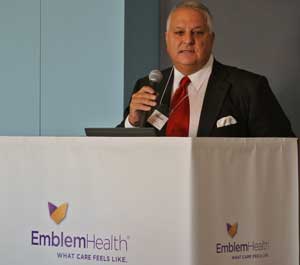 (See the LaborPress story on March 15, “Opportunity and Risk for Pension Funds’ Infrastructure Investments,” where we reported on SEIU 32BJ President Mike Fishman’s interest in the Ontario Municipal Employees Retirement System as a model for 32BJ to invest a portion of its pension monies in infrastructure.)

Pitta mentioned that he and the former president of the NYS AFL-CIO, Denis Hughes, collaborated to explore ways to use pension funds to fund state-wide infrastructure projects.

“It was a tough sell to the funds’ trustees, but when Governor Cuomo proposed the creation of an infrastructure bank during the election, we jumped on it.”

Cuomo ultimately met with Pitta and Hughes and 30 labor leaders and decided to adopt an innovative medium to fund new infrastructure. “Cuomo made a commitment that the state would not sell projects built with pension monies to private interests and that the work would be covered by a project labor agreement.”

Unfortunately, the Tier 6 debate abruptly halted the progress made by labor and Cuomo. However, Cuomo recently appointed a representative to move the progress forward, according to Pitta.

“There’s a long list of public projects that labor leaders want to wrap their arms around because it means union job-creation,” said Pitta. Some of those public projects include a new Tappan Zee Bridge, Goethals Bridge and renovations to LaGuardia Airport and the Port Authority Bus Terminal. 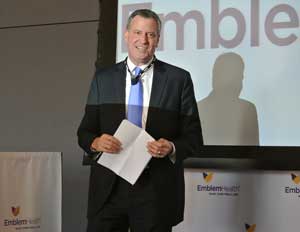 Public Advocate Bill de Blasio, who hosted the March 15th forum on pension funds and infrastructure at New York University, said that “people are thinking about pension funds in the wrong way.”

“The Chris Christies [NJ Governor] of the world have not only attacked labor, but they’ve also tried to turn people against the public sector.”

In contrast, de Blasio believes a better approach would be for government and labor to work together towards a new path to take advantage of a tremendous asset to lead the economic recovery.

“Pension funds (state, local and defined) equal almost $1.5 trillion in assets. With that kind of muscle, there’s no need to demonize labor.”

Just as Pitta and Hughes had to get buy-in from pension fund trustees, de Blasio acknowledged there’ll be some convincing to do as, “I had a hard time convincing NYCERS [the City’s employee retirement system] of allocating just 2 percent, or $800 million, towards affordable housing construction.”