Representative Joseph Crowley and Council Member Daniel Dromm, along with Transportation Alternatives, held a transit town hall meeting on Wednesday evening, April 11 to hear from the residents of Elmhurst, Queens their transportation concerns.

Both Crowley and Dromm have been in discussions with the Long Island Railroad to reopen the Elmhurst train station which closed in 1985. Although the station has been closed for a long time, LIRR trains still whisk by the community on their trips to and from Manhattan.

“The Elmhurst residents already hear the noise from the trains travelling back and forth, so now they should have the benefit of getting access to those trains,” said Dromm.

According to Dromm, the growing resident population and business development in the neighborhood is the reason why residents and workers should have additional transportation options. 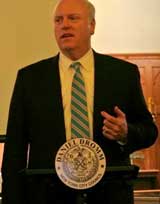 Crowley said, “The reopening of the Elmhurst Station would provide an alternative to subway and bus travel, and would reduce the amount of time for riders to get to and from Manhattan. About an hour’s travel time could be cut off each day, allowing riders more leisure time. They may have to pay a little more, but what’s the cost of freedom?”

Crowley and Dromm noted that the LIRR’s response thus far has been very positive because it recognizes the tremendous growth in Elmhurst. And while they couldn’t provide an estimated cost for the project, the scope of work would likely entail a new platform and upgrades to track rather than having to lay new track.

Jacob Balter, regional transportation planner for the LIRR, told LaborPress that plans to reopen the Elmhurst station is still in the early stages as the agency is trying to gauge community interest and determine whether there is demand to justify investment.

Before the Elmhurst Station can even open, however, the agency has to complete two projects already funded by the current Capital Program to ensure that there’s enough capacity by the time LIRR trains, originating from eastern points, reach Elmhurst.

“Currently, trains are already at capacity by the time they get to Elmhurst,” said Balter.

It’s safe to say that rehabilitation of the Elmhurst Station won’t begin until 2015, which is when the MTA’s next Capital Program takes hold.

“Funding is also a consideration,” Balter said. “We don’t have the money in the current Capital Program to finance the environmental reviews and design before we start the actual station work.” However, the bridge that crosses Broadway in Elmhurst where the closed station is adjacent to will be reconstructed later this year, noted Balter.

Ya-Ting Liu of Transportation Alternatives, a transportation advocacy organization, said that TA is working with elected officials like Crowley and Dromm to raise transit’s profile among the ridership, especially as the MTA has been raising fares since 2009 and is expected to raise them again in 2013, 2015 and 2017.

“Transit is a political issue. We need our voices heard if we want change that benefits riders,” said Liu.

She noted that she interviewed many riders at another LIRR station and a subway stop in Elmhurst and learned that people don’t mind paying more for service so long as they’re getting something in return.

The Elmhurst transit town hall is just one of several that TA will be holding with elected officials. Upcoming town halls will be held in Fordham Heights, Jackson Heights, Soundview in the Bronx and Sheepshead Bay in Brooklyn.
marc@laborpress.org