Some of Albany’s heavy hitters (apart from the three men in the back room) stepped on stage at Albany’s Hart Theatre to endorse TWU Local 100’s demand that their next contract not mirror the concessions agreed to by upstate unions.

Speaking to a crowd of about 1,800 mostly NYC MTA transit workers in the Hart Theatre, Senate Republican Marty Golden (R-Bay Ridge), who has played a key role in recent funding decisions which resulted in more money for transit, said that money should also be found for a decent raise for transit workers. “Three zeroes,” he said, “doesn’t really work well, especially if you live in the New York City area. Other unions have resolved their issues, but not happily,” he added, “in a different cost of living. There’s a different cost of living between upstate and downstate, and if you live downstate, you know what that cost of living is.” Golden also called MTA CEO Joe Lhota “hard nosed, but a fair man,” and said that he plans “to work with that fair man, to get down and do what needs to be done.” 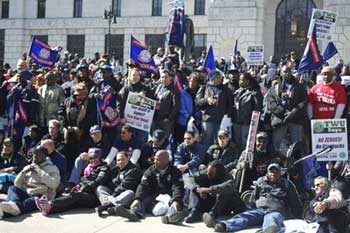 “Asking you to take zeroes is tantamount to asking you to take a pay cut,” said Assemblyman Carl Heastie (D-Bronx) “You guys aren’t the reason why wehad a recession. This was not your fault, so we stand with you to get a fair contract.”

TWU members fanned out to lobby individual legislators and then rallied outside, in an impressive march which wended its way across Empire State Plaza and into the park opposite the old capital building where Governor Cuomo has his offices. TWU Local 100 President John Samuelsen went inside to present the key points of the Union’s “MTA Can Pay” campaign, which highlights money which the union contends the MTA is holding in rainy day accounts which should be spent now to fund its contract and restore bus and subway cuts that took place in 2010 under former MTA CEO Jay Walder.