NYSNA Galvanizes Nurses for May Vote

New York State Nurses Association nurses rallied outside The Brooklyn Hospital Center on Tuesday, March 27, not to specifically protest any management shenanigans, but to rally for a stronger union. NYSNA, probably unlike any other union in the country, has a two-body governing structure that includes supervisors from different private hospitals who don’t necessarily understand the everyday health care issues bedside nurses encounter.

The union will be holding a membership meeting in May for members to vote to unify elected leaders into one governing body, and to expand the new Board to 21 members by including more bedside nurses.

According to the union, under the current structure, the elected member-leaders of the Delegate Assembly represent 36,000 out of 37,000 members, and have only an advisory role. The NYSNA Board, “technically the governing body of the union, cannot discuss union issues and has no governance role because statutory supervisors are eligible to sit on the Board.”

Joyce Cave Anderson, a RN for 34 years at Brooklyn Hospital and Grievance Chair for the local bargaining unit at the hospital, said the union held the rally to galvanize nurses to attend the May 17 membership meeting at the Jacob Javits Convention Center so that at least two-thirds of the union members present votes to approve changes to the by-laws to reorganize the union’s governing structure.

Anderson said that under the new rule, should the nurses vote in favor, the supervisors currently on the board who have the power to hire and fire other nurses, will not be able to on the union’s board of directors. “This means that the nurses on the front lines of healthcare will have full control of their union, and be better able to stand up to management when they need to,” said Anderson. 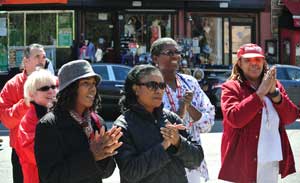 The union noted that the new structure, for starters, will unify the union’s voice and strengthen the union’s ability to tackle tough issues such as understaffing and contract fights.

A labor representative for the union said that if the nurses vote for the changes, the union can then pursue legislation that limits the number of patients cared for by each nurse. According to the representative, only California has such a law.

“There’s legislation that’s been languishing in Albany for at least five years that would limit the ratio to 6 [patients] to 1 [nurse],” said the representative.

The representative explained that about 90 percent of the hospitals in the City have committed to a lower patient to nurses ratio, but in the boroughs where hospitals don’t necessarily enjoy the resources as hospitals do in Manhattan, the ratio can be higher.

Valerie, a nurse for 13 years in the pediatrics department at Brooklyn Hospital, said that the current contract with the hospital includes a provision to limit the ratio, but she’s worked shifts where she and another nurse have been responsible for multiple patients.

“Sometimes I’ve had to use some of my break and lunch time to make sure that I’ve explained to the patients the necessity to take their medicine regularly and to document their progress or relapse during their stay.”