WASHINGTON, DC – In a landmark decision, Walmart has been ordered to stop threatening workers who 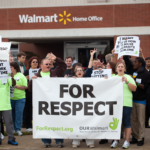 Walmart has settled a long-running battle with labor activists over the stores policy of  punishing workers that support union organize activities. The agreement forces Walmart to  acknowledge it has violated federal labor law in many of its California stores.

In a National Labor Relations Board sweeping decision,  Walmart must drop an employee dress code that bans clothing bearing union insignias. In addition,  all disciplinary actions taken against six employees in its Richmond, California stores will be removed from the file.

Walmart has fought unions for years. It holds regular meetings with staff reviewing the benefits of a non-union store. It spends millions in legal actions each year in an effort to keep its 1.5 million workers from joining labor organizations.

In the California case, the NLRB concluded in 2016 that Walmart took illegal action against employees. Walmart broke the law when it punished its workers for exercising their federally protected right to peaceful protest. The agreement acknowledges that the Walmart  dress code restricting union apparel violated U.S. law. As a result, Walmart must post notices in several of its  California locations regarding changes in clothing restrictions.

Although Walmart maintains it acted lawfully,  it has agreed to take remedial action. The notices posted in the stores, as well as the chain’s employee intranet, state that store managers will stop threatening to close stores if workers join OUR Walmart. Clearly this is a huge win for OUR and unions.