In November 2011, the AMR Corporation, parent of American Airlines and American Eagle, filed for bankruptcy protection in New York claiming a strong need to achieve a cost and debt structure to assure long-term viability. But according to union leaders at a Battery Park City joint union rally on Monday, April 23, they have already conceded too much.

The Transport Workers Union and the Association of Professional Flight Attendants led the rally before marching about 100 yards to the front of the bankruptcy court on Bowling Green to protest against the company’s filing for bankruptcy protection, which they claim could result in significant job losses.

American wants to abrogate its current union contracts with the TWU, APFA and the Allied Pilots Association, which would mean about 9,000 job cuts for the TWU and 2,300 for the flight attendants.

But the unions say that bankruptcy protection is not the only option for the carrier. They claim that the business plan that American has proposed is not sufficient to return the company back to profitably. So the three unions, representing a total of 55,000 American Airlines employees, are in favor of a merger between US Airways and American Airlines.

Angelo Cucuzza, an executive board member of the Air Transport Division for Local 501 in New York, represents about 1,700 Local 501 members and 800 members of sister Local 562 who work at six major airports on the East Coast, including one in San Juan, Puerto Rico. 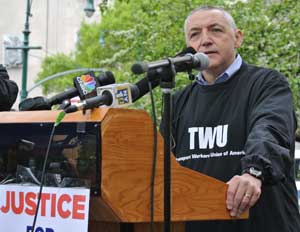 “Today’s action is all about outsourcing. It’s not about eliminating positions, but eliminating TWU union positions and replacing them with low-wage, low-benefit jobs,” said Cucuzza before the rally began.

James Little, TWU’s International President, told LaborPress that his members’ livelihoods are at stake. “We stand to lose 8,800 jobs if the judge grants the bankruptcy protection. That’s why we’ve talked with US Airways because they have said that they will not draconically cut positions.”

During the rally, Little stressed the importance of labor solidarity. “At some point, labor in this country has to wake up. Without labor, this country doesn’t operate.”

Anne Loew, chief negotiator for the flight attendants, said it has been very frustrating negotiating with American Airlines the past four years. She noted that in 2003 the union agreed to $340 million in givebacks ($520 million in today’s dollars), and now the company wants another $230 million.

She’s in favor of the merger with US Airways because “in every area of the term sheet, US Airways did better for our members than American Airlines. We achieved more in four days’ worth of negotiating than in four years with American,” said Loew.

Carl Esposito of Local 501 has worked for American Airlines the past 10 years loading and unloading aircraft at JFK airport. He said it’s disheartening that American has filed for bankruptcy protection.

“We work harder and harder, but we can’t get ahead because prices keep going up, but wages are stagnant.” He also noted that because of the 2003 givebacks, some of his work colleagues work two jobs or work more overtime when it’s available to make ends meet. 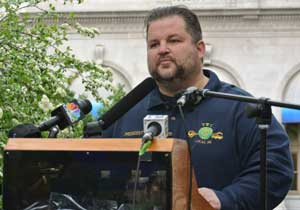 John Samuelsen, TWU Local 100’s President, who introduced the different speakers before the rallying union members, said, “We need to stand up for workers not only at American Airlines, but for workers across the entire country.”

He added, “American families are suffering one attack after another, both public and private sector. American Airlines is just the latest example of a chain of corporate attacks against workers.”

Inside the courthouse, Jack Gallagher, Senior Counsel for the Paul Hastings international law firm representing American Airlines, said that the company is filing for bankruptcy under Section 1113 of Chapter 11 Bankruptcy, which codifies under what circumstances collective bargaining agreements may be rejected, for a simple reason.

“Our financial crisis is real. American Airlines has the highest labor costs in the industry. We need to fix this business for the future.”

He noted that the proposed restructuring presented to the Honorable Sean Lane is not just about union-represented workers, but applies to the company’s non-union workforce of about 20,000 workers.

“The restructuring is already underway for the non-union workforce, who’ll see a 20 percent cut in their compensation and benefits.”

Gallagher added, “Unfortunately, we haven’t been able to convince the unions, who have rejected our proposals without good cause.”

Gallagher cited some external events contributing to the carrier’s financial distress, which necessitates a $1.25 billion reduction in union labor costs, such as wages, the defined pension plan and medical benefits for active workers when they retire.

“The rise of low cost carriers expanding beyond domestic markets into the Caribbean and Latin America, the events of the past ten years [September 11, 2001 attacks and the wars in Iraq and Afghanistan], the dramatic increase in fuel price volatility and mergers by our competitors are the factors responsible for the company’s current plight.”

In addition to the labor concessions, Gallagher said the company’s new business plan, which The Rothschild Group, led by David Resnick, Chairman of Global Financing Advisory, helped to formulate, will help it generate $1billion in revenue over the next six years by expanding the carrier’s network, expanding into international markets and deploying larger regional jets.

James said, “The company is seeking $1 billion from the pilots, which represents about one-third of the company’s proposed labor cuts, which we don’t think is fair and equitable.”

He added, “The company’s business plan to return to profitability is a plan that outside experts say doesn’t make sense. They believe the only way the company can achieve financial stability is via the merger. But when we asked the company if they had considered another business plan option, they responded ‘No.’”

Clayman noted the proposed cuts of 17 percent, combined with the 30 percent (factoring inflation) cuts in 2003, flight attendants stand to earn half of what they made in 2003, “which clearly is not equitable, as the company claims.”

Clayman said that the carrier’s proposed business plan is incomplete and based on groundless assumptions.

“What’s remarkable about this plan is that the company expects to grow by 40 percent by 2017. The plan’s assumption is that there’ll be no competitive response [from Delta and United]. We suggest that rather than pursue bankruptcy, which will result in a 30 percent decrease of market-based collective bargaining agreements, the company should merge because we believe American doesn’t have six years to meet its business plan’s goals.”

Representatives from the TWU told the judge that the union’s leadership has put out to vote to its members the last best offer the carrier proposed to the seven locals, and therefore reserves its right under Section 1113 of Chapter 11 Bankruptcy should the members vote no.    marc@laborpress.org