New York City — More than 50,000 workers marched up Fifth Avenue Sept. 10 to celebrate and show the power of the labor movement — but you wouldn’t know it by reading the newspapers.

“Look at this turnout,” said Mike Mulgrew, president of the United Federation of Teachers. He pointed to the crowd of teachers carrying signs for the UFT. “This is three times what we normally get.”

The marchers recognized the heroic efforts of New Yorkers on Sept. 11, 2001, nearly ten years before. They also showed their solidarity with each other and their ability to organize and fight what union leaders call an attack on labor — strength that will come in handy in the struggle to come.

“The typical union member doesn’t have to be told that he is under attack,” said Jack Kittle, political director of the Painters & Allied Trades, District Council 9. “Union members are fed up.” In response, private sector unions and public sector unions are closing ranks.

“It all falls under solidarity,” said Stephen McInnis, political director for the New York City District Council of Carpenters. “For years we have been divided. Now we are coming together.” 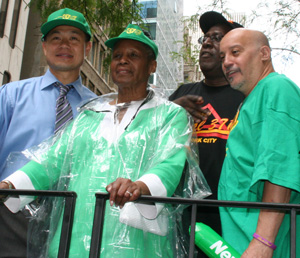 Union marchers — including drum and fife groups, marching bands and the International Brotherhood of Electrical Workers’ motorcycle club — far outnumbered the people watching from the sidewalk. “This is our parade. It is not a spectator parade,” said Robert Ledwith, business manager for Metallic Lathers and Reinforcing Ironworkers Local 46. The unions didn’t advertise to inform the general public about the parade, which was held a week after the official Labor Day September 5.

Passersby stopped to stare and sometimes cheer as the floats rolled though Manhattan’s priciest shopping district. “We are the union! The mighty, mighty union!” workers chanted as they passed Tiffany & Co., Bergdorf Goodman and the Trump Tower.

“Well, it’s a labor union,” a dad in a polo shirt explained to his young son outside of the FAO Schwartz toy store. “They protect the rights of workers.”