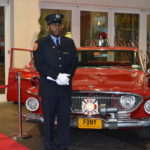 its centennial with a gala held at the Chelsea Piers in Manhattan. Hundreds turned out for the event, which was marked by a formal sit-down dinner, speeches by top brass, a Marine show, music by the Emerald Society Pipe & Drums, and an appearance by the Mayor.April 4th of this year was the 100th anniversary of the date in 1917 when Firefighter Albert Guinness, Ladder 140, unionized New York City Firefighters. During the past century the UFA has worked to promote, support and secure the labor rights of firefighters in New York City.

Attendees entering the venue were treated to the sight of old firetrucks and cars, and a banner proclaiming “Celebrating 100 Years of Service.” A video of scenes of firefighters on the job from 1917-2017 played inside, while outside, on the river, two FDNY boats, Marine 1 and Marine 2, put on a water show, blasting shoots of red, white, and blue water into the air.

Mayor de Blasio spoke to the crowd, saying, “Every day your members do amazing things. This union represents some of the most noble work done anywhere…today, for example, your men saved two women, one pregnant, and two children, one under two years old.” He then proclaimed the day “UFA Day,” and presented UFA President Gerald Fitzgerald with a framed certificate on the proclamation. “Congratulations,” said de Blasio, “Here’s to 100 more.”

The FDNY Emerald Society Pipes & Drums, clad in kilts, struck up tunes, including “America the Beautiful.” Afterwards, the national anthem was sung, as attendees stood, saluting, or with hands on their hearts. A chaplain offered a benediction, “for those who give their lives,” and a rabbi said, “May we continue to give to strength to one another.” Then, all observed a moment of silence for “All the fallen firefighters in the history of the USA, those sick, including from the World Trade Center tragedy, soldiers oversees, and our brothers and sisters in Texas and Louisiana.”

Fitzgerald then introduced a video “UFA – Our First 50 Years,” which charted the long and difficult journey of the fight for workers’ rights, as well as its many victories. Fitzgerald then spoke, saying, “We are here to celebrate 100 years of the FDNY. We’ve lost members, sustained injuries, but this is what we do, this is our calling, and we take great pride in it.” He mentioned the Zadroga Act, pension plans, and political action committees as accomplishments, among others. “This is the home of New York City’s bravest,” he added.