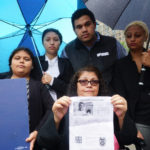 on Long Island after fleeing Guatemala’s military dictatorship in the late 1980s, was deported back there Sept. 6 by U.S. Immigration and Customs Enforcement.The move came five days after federal immigration authorities rejected two appeals to stay the deportation on the grounds that Garcia Vasquez was in the process of applying for legal residency because his wife is a United States citizen; that his deportation would cause great hardship for his family because he is the only breadwinner; and that his life would be in danger if he returned to Guatemala.

“Vasquez was removed to his native country yesterday without incident,” an ICE spokesperson said Sept. 7.

ICE would not give reasons why his appeal was denied. Garcia Vasquez’s lawyer, Zachary Sanders, says it told him there were “no compelling reasons to exercise discretion in his favor,” that there were other adults in his family who could bring in money, and he could continue to apply to be a legal immigrant from Guatemala.

“I am saddened, and frankly, shocked that Eber was deported so quickly. This is happening to thousands of immigrants across the country and the inhumanity is obvious in each story,” Teamsters Joint Council 16 President George Miranda, said in a statement. “Today a family was torn apart, and now is without a breadwinner. Our union lost a valued member.”

Garcia Vasquez came to the U.S. from Guatemala’s rural El Quiché province in the late 1980s after a government paramilitary patrol threatened to kill him, says Sanders. A few years earlier, the country’s military dictatorship had massacred 116 people in Chicamán, his home municipality. He applied for political asylum, but was eventually rejected, and he lost his last appeal in 2012, according to ICE.

Meanwhile, he worked at Stericycle, a medical-waste disposal company in Farmingdale, for 26 years. He lived with his wife in Elmont, Long Island, and they had three children and two grandchildren.

Losing his appeal put him on “supervision” status, where he could be deported, but it was stayed temporarily as long as he checked in periodically with ICE. He was seized when he went to check in Aug. 24, and taken to the Bergen County jail in New Jersey. Sanders believes he was then taken to a privately owned immigrant-detention center in Louisiana or Texas.

“He’s been here all along—they’ve known where he’s been. And he just went in for a routine check up. He’s done absolutely nothing wrong,” Miranda told LaborPress’s “Blue Collar Buzz” radio show. “He’s not a ‘bad hombre’ at all. He’s routinely followed the rules that were set down for him. As long as he kept his nose clean and didn’t get any felonies, or anything like that, he could remain in this country and work. And that’s what he was doing.”

He also “fears returning to Guatemala because several members of his family have been killed,” Sanders told LaborPress. His mother was brutally murdered in 2007, and three cousins were slain soon afterwards. No one has been arrested.

While Guatemala’s 36-year civil war ended in 1996 and the country is no longer a military dictatorship, it—like neighboring Honduras and El Salvador, which also suffered military rule during the Cold War—is plagued with gang violence. The three nations’ murder rates are among the world’s ten highest, according to figures compiled by the United Nations Office on Drugs and Crime.

Garcia Vasquez’s family fears losing their home without his income, and they also may not be able to send their daughter Arly, who graduated high school in June, to college. “Without him we’d have crumpled,” she told a rally supporting him Aug. 29. His wife, Maria Chavez, is in a wheelchair after breaking her ankle in a car crash earlier this year.

“This case highlights the consequences of the change in administrations,” says Sanders. “He actually had a path to a green card. We have a new administration that prioritizes deporting everybody who can be deported.”

He also suspects that ICE deported Garcia Vasquez so quickly because of the media attention his case had raised in New York.

Garcia Vasquez can continue to apply for permission to immigrate to the U.S., Sanders added, but because he lived and worked here without authorization, he has to apply for a waiver based on family hardship—the claim ICE rejected on Sept. 1.

Meanwhile, Teamsters Joint Council 16 said it plans to set up a fund to help the Garcia Vasquez family cover their expenses. “We work with a lot of organizations here in New York, and we hear all the horror stories across the country,” Miranda told Blue Collar Buzz. “This is wrong. This is not what America is about.”