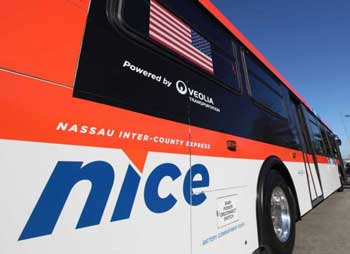 It’s nice that TWU Local 252 has reached a tentative agreement with Veolia Transportation in Nassau County for 800 members to provide bus service to County residents after the MTA abandoned the union and public ridership last year. Pat Bowden, Local 252’s president, believes the contract is fair, but is disappointed that the MTA did not hire her members for other positions within the MTA network so that they could retain their pensions, which isn’t so nice.

The 800 members started driving the Nassau Inter-County Express (NICE) buses on January 1, but the members have to ratify the contract by Monday, January 9. While Bowden is happy that her members will continue to have jobs and pay raises over the five-year contract, new drivers will start at $10 less than veteran drivers. And because the 800 members now work for a private company, the state will not continue to finance their pensions, despite some members driving for 25 years.

“My members will see a 27 percent pension reduction, and if they retire or leave early, they’ll lose up to an additional $9,000. The MTA could have done better for my members, as they took back management personnel after departing Nassau,” said Bowden.

She noted that some of her members did apply and get jobs such as cleaners with the MTA, albeit at lower wage rates, just to maintain their pension levels. “While the MTA is hiring from the street, they should have given my members who are qualified first dibs on those jobs,” Bowden said.

Veolia, like a typical private sector company in the U.S., is not offering a pension, but will match members contributions into a 401k plan by five percent, although new members’ will get only a three percent match from the company.

Another source of economic pain for the members will be the new insurance coverage plan. Whereas members formerly spent only 1.5 percent on health care bills while working with the MTA, members will be required to pay up to 20 percent with Veolia.

But a concern among County residents and organizations is that Veolia might not live up to its obligations with Nassau, given its track record in other cities across the country. In November, Long Island Jobs with Justice produced a report (Protecting Riders, Workers and Taxpayers in Nassau County) that highlights some of the infractions committed by Veolia.

For example, the report states that the city of Phoenix in January 2011 fined the company $3.3 million for having late, broken and unkempt buses. In Columbia, South Carolina, the company is proposing an additional 63 percent cut to service, eliminating weekend, holiday and midday service. And in Las Vegas, fares nearly doubled and services were reduced by over 20 percent.

Kraus said, "This announcement will not affect our North American activities, including our more than 200 operations in the U.S. and Canada, or any pending contracts. Our employees, likewise, are not affected."

Nonetheless, the 800 members of TWU Local 252 are currently behind the wheels of new buses thanks to their and Bowden’s efforts.