The Lock Out of Local 1-2 is Everyone’s Fight

The Lock Out of Local 1-2 is Everyone’s Fight 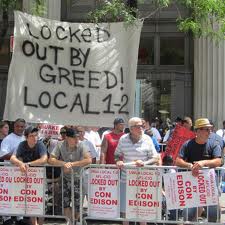 As many New Yorkers know, on Sunday, July 1 2012, Consolidated Edison—a company that raked in more than $1 billion in profits in 2011—locked out 8,500 unionized workers. These men and women are not getting paid, are being forced to go on unemployment, and have had their health benefits stopped—abruptly, without warning.

Con Edison, which supplies electricity to 3.2 million households in the city, intends to replace the current pension plan (a guaranteed monthly benefit on retirement) with a 401(k), which is subject to the ups and downs of our failing economy. They are also demanding significant pension reductions and a pay freeze.

The company’s union, the Utility Workers of America (UWUA) Local 1-2, wouldn’t agree to these outrageous proposals, but was willing to negotiate for two weeks without a contract. Their generous offer was coldly rebuffed by the company, which then locked out their employees, many of whom had worked for Con Ed for years doing productive and necessary work. The company immediately replaced the union workers with 5,000 replacements, mostly inexperienced managers, who have already suffered injuries—some severe—doing the work trained union members had been doing efficiently all along. In addition, the company is now bringing in non-unionized workers from Virginia and Alabama-two low wage states—to further their plans to break a union which over the years successfully negotiated wages that enabled members and their families to live with dignity and security.

Recently, I joined thousands of people rallying against Con Ed, including the United Federation of Teachers, Occupy Wall Street, District Council 37 (from which I retired), and students of CUNY. There were signs denouncing Kevin Burke, CEO of Con Ed. who earns an “estimated $5,000 an hour and has 18 million in his own pension fund.” Another sign read, “Give my dad’s job back now, Con Ed, I’d like to eat.”

As the sun beat down on the streets of New York I couldn’t help thinking about these union men and women and how grateful I am to these utility workers. They labor day and night in all kinds of weather, from freezing rain and snow to unbelievable heat working beneath the ground in manholes that sometimes exceed 100 degrees, to provide electricity and prevent gas explosions so that we, the people, can live our lives every day with safety. We should all remember this every time we turn on a light, an air conditioner, or a fan during these hot weeks—that without the work of these individuals, we would certainly be a lot more uncomfortable—sometimes dangerously so—and a lot less safe!

Persons in this union and every union, and Americans as such, need to know what Eli Siegel, philosopher, economist, and founder of Aesthetic Realism explained in: Goodbye Profit System: Update about the importance of these men and women:

“The most important thing in industry is the person who does the industry, which is the worker…. Labor is the only source of wealth. There is no other source, except land, the raw material….Every bit of capital that exists was made by labor, just as everything that is consumed is.”

I’ve attended rallies nearly every day. Talking to these locked-out workers has affected me deeply, and made me so grateful for what I’ve learned from Aesthetic Realism. For example, I spoke with Bob, who worked 50 years as a senior design engineer and Glen, a senior electrical technician with 25 years of experience with the company. Now because of the lock-out both are unemployed and without health coverage for themselves and their families. With much feeling in his voice Thomas Cunningham, safety director of the union told me:

“When they locked us out they stopped the health insurance for our workers. Our workers were there on 9/11. They have lung disease, respiratory problems, cancer—now they have no coverage. It is greed. It is for profit only. They want to break the union.”

And Dominic Marzullo, business agent for the union stated:

In The Right of Aesthetic Realism to Be Known, titled Economics & Human Lives, Ellen Reiss, Chairman of Education, explains what is going on in America.

“The idea that an economy should be based—not on what’s useful to people, fair to every man, woman, and child—but on some people making a profit from other people’s work and hopes and needs: this is sheer contempt. The profit system’s underlying ethical shoddiness is what made it, by the last third of the twentieth century, be mortally ailing, after centuries that included child labor, sweatshops, huge profits for some and much suffering and poverty for others.”

American industries, including Con Edison and Verizon, are trying to bust unions, take away pensions, eliminate health benefits, freeze wages, and lay people off. State governments and municipalities are trying to privatize services now performed by union workers. All these brutally unjust measures, which have Americans poorer and more desperate than ever have one goal—to prop up an economic system based on profit for a few that has essentially failed, and will not recover until we have an economy that is based on ethics—on fairness to every living person in this great country of ours. What the Con Ed workers are fighting for-compensation that is just and deserved—we should all be concerned with. Their fight is our fight.