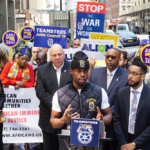 calling for legislative reforms to our City’s commercial waste industry and the suspension of Sanitation Salvage’s license, over the company’s reckless track record.

“Sanitation Salvage’s reckless disregard for workers’ safety, or even their basic humanity, is all too common in New York’s private sanitation industry,” said George Miranda, President of Teamsters Joint Council 16. “The Teamsters stand in solidarity with the workers at Sanitation Salvage who are fighting for safe jobs, and the Bronx families that are mourning Mouctar Diallo and Leo Clark. The Business Integrity Commission should suspend this company immediately and the Department of Sanitation should recommit itself to strong reforms of the industry to protect workers and the public.”

This issue was brought to light when  Mouctar Diallo, a 21-year-old immigrant from Guinea, was run over by the truck he was working on in November 2017. Diallo had been working off-the-books on a Sanitation Salvage truck for over a year. Police were originally told that Diallo was unknown to the company and he was reported to be a “crazed homeless person.” The driver who ran over Diallo continued to work for Sanitation Salvage. That driver  on April 27, 2018 hit-and-killed 72–year-old Leo Clarke.

“Mouctar Diallo was like a lot of immigrants who come to this country, looking for a decent job and a better life,” said Council Member Carlos Menchaca. “Instead he was treated as expendable as the trash he was picking up. BIC should suspend Sanitation Salvage’s license immediately, but that is not enough. We need to recommit to the exclusive waste zone system that the Department of Sanitation announced two years ago. Watered-down reforms will not be enough to hold private carters accountable.”
Since 2010, the private carting industry has had 33 vehicular fatalities. In addition to the grave danger that the private carting industry poses to pedestrians and workers, it is inefficient and counterproductive towards our City’s environmental sustainability goals.

“Since 2010, private sanitation trucks have been responsible for the tragic deaths of 33 people, including Mouctar Diallo and Leo Clark. This is beyond unacceptable– both for the industry’s employees and for pedestrians. To make matters worse, drivers work excessive shifts, and the trucks themselves fail safety inspections at four times the national average. The private sanitation industry is simply not up to New York City’s standards and needs to be better regulated, not just for everyone’s safety, but also to help us meet our sustainability goals,” said Council Member Helen RosenthalFor years, the private carting industry has engaged in dangerous behavior and BIC has consistently failed to take action.  In addition to the two recent fatalities, Sanitation Salvage has a history of putting trucks on the road that are unsafe to operate. Over the past two years, Sanitation Salvage’s trucks were inspected 12 times by government regulators and violations were found in every inspection. Ten of those inspections – 83% – had such severe violations that the trucks were ordered out of service. This is four-times greater than the national average failure rate of 21%.

“A young man lost his life working for Sanitation Salvage and it was covered up,” said Council Member Rafael Espinal. “Six months later, another New Yorker lost his life when he was run over by the company. The Business Integrity Commission should suspend the company’s license and show that in our city, worker safety and public safety are a priority.”The deaths of Mouctar Diallo and Leo Clark are horrific tragedies, yet they are not isolated events. The sad reality is that the story of Diallo and Clark is yet another example of the private carting industry’s rampant negligence.