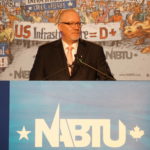 While it makes no sense for  Republican legislators to promote bills that cut wages in local communities, several congressional representatives have introduced anti-worker legislation.

Rep. Paul Gosar, R-Az., has  tried several times to introduce bills that would  weaken Davis-Bacon – by lowering the wage base. Rep. Steve King, R-Ia., has introduced legislation that would repeal Davis-Bacon.

For years, the North America’s Building Trades, a division of the AFL-CIO, has successfully defended Davis-Bacon against assaults by the anti-worker anti-union organizations and its congressional Republican allies, even though Republicans pushed Davis-Bacon through in 1931. NABTU has continually been a vigilant watch dog in the battle to protect prevailing wage laws.

President  McGarvey, told the legislative conference audience  that “we engage lawmakers of both parties to ensure our tax dollars are not used to undermine standards or promote a race to the bottom.” The battles aren’t going away – if long-term victories, economic opportunities and retirement security is what we seek. When misguided politicians in some states look to undermine long fought health, safety and wage standards for the construction industry, bipartisan political engagement is critical, said the NABTU President.

“Together, we can effectively bring an end to the ‘race to the bottom’ that has devastated countless American workers and their families. Together, we can protect prevailing wage standards, promote fair contracting, and expand the use of project labor agreements,” continued McGarvey.