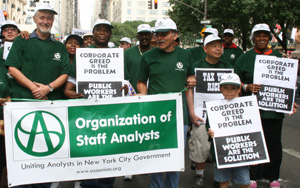 Two days after President Obama announced his jobs plan to a joint session of Congress, and one day before the 10th anniversary of 9/11, New York City’s union movement celebrated Labor Day by proudly marching along Fifth Avenue.

Some unions’ members carried banners and signs displaying their union’s colors, while others, like members of Local 14 of the Union of Operating Engineers, drove mobile tower cranes to show passerby along the parade route the tools of their trade. And some others were more boisterous.

SEIU 32BJ members were very vocal because 73 of their brothers and sisters have been locked out from the sprawling Flatbush Gardens building complex by their employer since November 2010. Not too far behind 32BJ members marched CWA 1101 members who were equally vocal, as they continue to work without a contract for Verizon. Probably the best representation of the unions’ diversity and sense of urgency in regards to the pressures daily confronting unions was the contrast between SEIU 1199 members carrying placards that read “The Rich Must Pay Their Fair Share,” while IBEW 3 members, wearing leather vests, careened down Fifth Avenue sitting atop unruly Harley Davidsons.

Many different members and leaders said this year’s Labor Day parade obviously had more meaning because of the day’s proximity to the 10th anniversary of the 9/11 attacks. But many also expressed that Labor Day 2011 has more significance than years past because of the attacks on collective bargaining launched earlier this year against Wisconsin’s unions by Governor Scott Walker.

Maurice Jenkins, Vice President of the Station Department for TWU Local 100, said, “Unlike past [Labor Day] marches, the cloud hanging over this year’s march is the threat of reversal of the gains unions have made.” But Jenkins noted that, although unions may not have been so ready to work collaboratively previously, the “process is taking place” whereby unions are working together to ensure that attacks on collective bargaining don’t happen in New York.

Teamster’s Local 237 President, Gregory Floyd, said, “Labor Day 2011 represents a stand among unions against an outcome realized in Wisconsin.” Abelardo Aleman, business agent for the Tobacco Workers and Grain Millers, Local 53, said that today’s political climate, “which is definitely not tilted towards labor,” has made it difficult to organize new members as employers feel emboldened to stop or break organizing drives.

Palladino said unions now need to be proactive because “all of labor is vulnerable.” Jenkins’ call for more union collaboration is probably encouraging to members, who most likely will play an important part in how that strategy unfolds and evolves by time Labor Day 2012 arrives.