But the invited speaker Seth Pinsky, President of the New York City Economic Development Corporation (NYCEDC), spoke to counter the bad news with initiatives his agency has been pursuing to help diversify the city’s economy and strengthen its position amidst strong international competition.

Before Pinsky elaborated on some of the city’s initiatives, Richard Anderson, President of the Building Congress, pointed out some highlights and statistics from the New York City Construction Outlook Report. 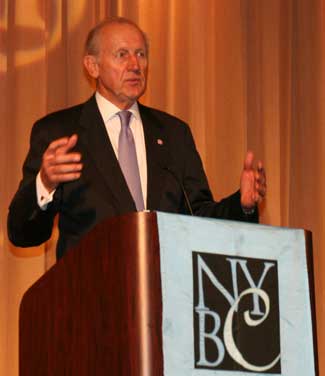 According to Anderson, “public construction is the story in the report.” It notes “the resiliency of government infrastructure investment has been a reassuring surprise in the aftermath of the Great Recession.” The report credits the availability of federal stimulus funding for the $16 billion spent on “schools, roads, sewers, mass transit and other vital systems from 2008 through 2010.”

The main culprit for the drop in spending and the concomitant drop in employment is that “the infrastructure component in the city’s Capital Budget is starting to slip,” said Anderson. Infrastructure spending for 2011 “will reach $14.4 billion, but will decline to $9.6 billion in 2013,” the report states.

Of the recommendations that Anderson emphasized to stem the decline in construction spending and unemployment is “to press to secure all elements of the MTA’s current proposal to finance the remainder of its five-year capital plan.”

TWU Local 100 would certainly agree with the recommendation, as it and transportation advocates and allies stood on the steps on City Hall on September 22 to demand that Governor Cuomo sign the Transit LockBox Bill, which would prevent the state from raiding the MTA capital budget to plug holes in the state’s annual budget.

Pinsky noted that in his early travels abroad his observations reinforced his perception that the U.S. enjoyed superior economic development compared to many countries. “But by 2000, I witnessed tremendous infrastructure transformations not just in the traditional emerging economies of Brazil, China and India, but in Tehran, Sudan and Kurdistan.”

He noted for a long time these countries have been imprinted in the U.S. public eye as isolated from the rest of the world. “But their rising investments in infrastructure are in stark contrast to the disinvestment’s here due to an austerity push.”

Pinsky said we can’t afford to repeat our actions during the 1970s fiscal crisis “when we stopped investing in the future, contributing to an economic and social disaster that took decades to climb out of.”

To avoid a repeat of the 1970s, Pinsky outlined how the city is keeping its eye on the long-term. “We’ve developed a two-pronged approach to transform the city into a global leader in different industries.”

The second prong of Pinsky’s strategy is to expand the city’s technology sector, which Council Speaker Christine Quinn talked about to business leaders last week at the Association for a Better New York (ABNY) event.

“The city offered a challenge to the nation’s leading academic institutions to come up with proposals on building a new technology campus. Twenty seven institutions submitted proposals and we expect to select the winners after the New Year,” said Pinsky.

To attract the institutions, “the city is prepared to offer technical assistance, land and $100 million in infrastructure improvements,” noted Pinsky.

While the efforts by Pinsky and Quinn and other city officials to expand and diversify the city’s economy are commendable, the concern is that the technology jobs created as a result of the strategic investments may only be available who have access to expensive, formal college training.

Quinn told the audience at the ABNY event last week that, “We are not going to let the dream of the middle class disappear.” Patrick Muncie, NYCEDC’s press spokesperson, said that in June Mayor Bloomberg and Quinn announced “22 new initiatives to help small industrial businesses stay and grow in the city, which will provide opportunities for middle-class and working-class families who do not receive formal advanced training.”

Some of the projects include creating 1,300 jobs in light manufacturing in Sunset Park, redeveloping a new market facility for the Hunts Point Terminal Produce Cooperative in the Bronx and creating a food manufacturing facility in East Harlem.