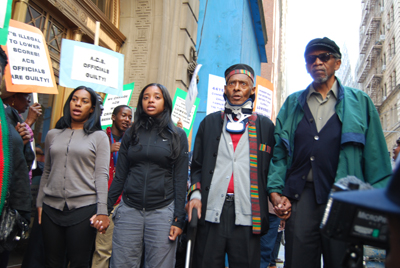 The leadership of the Alonzo Daughtry Day Care Center in Brooklyn made good on a promise to protest the takeover of their 44-year-old educational program by engaging in acts of civil disobedience outside the offices of the Administration for Social Services [ACS] this week.

On Tuesday, September 25, Reverend Herbert Daughtry and three others were arrested and charged with disorderly conduct after they attempted to block ACS’ entrance at 150 William Street in Manhattan.

The Alonzo Daughtry Day Care Center is just one of many other successful educational programs running throughout the city that are now expected to turn over control to city-approved programs deemed better suited for the Bloomberg administration’s new EarlyLearn initiative. 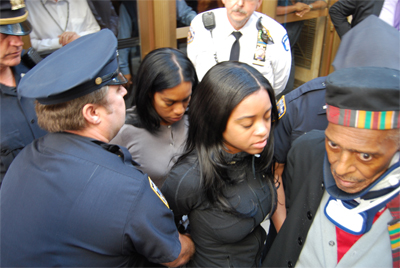 According to the program director, ACS never notified any of the parents who have children enrolled at the Alonzo Daughtry Day Care Center that new sponsors are scheduled to begin operations on September 28.

A group letter from parents expressing their outrage with the city’s behavior declares, “ACS expects that we would make this change and handover our children to the program we know nothing about, did not choose, and have no time to research fully. The agency, in effect, is forcing us to leave our children in the care of strangers which none of us is prepared to do.”

In all, about 35 people currently employed with the Alonzo Daughtry Day Care Center are expected lose their jobs.

As previously reported here, Dr. Daughtry and her supporters maintain that ACS deliberately – and illegally – lowered the nationally accredited program’s score on a crucial Request For Proposals submitted last year.

“We’re on a political hit list along with Ft. Greene and others,” Dr. Daughtry said. “Somebody gave us a 61. In my heart I believe that person, whoever they are, were told to make their score low enough so that we would have to be flagged by the quality assurance team who then comes in and looks at the scores again.”

The last time the Alonzo Day Care Center sponsors submitted an RFP in 2001, they scored a 99 and won the right to utilize the building they currently inhabit in Park Slope.

The Alonzo Daughtry Day Care Center leadership is now urging the two ACS and one Department of Education consultants who evaluated their program, to explain exactly how they arrived at their scores.

“The consultants that brought their scores down said that if they are called in for an investigation they will tell the truth,” Dr. Daughtry said.

Until that “black cloud” is lifted, supporters say ACS’ entire RFP scoring process should be considered “null and void.”

Just prior to being arrested along with Reverend Daughtry, National Executive Director of the National Action Network Tamika Mallory said, “We want families to become the most important part of any policy that’s established in any type of early learning program. I don’t think enough consideration is being put into how systems are being set up to serve children and families.”

Before cops handcuffed him and led to a waiting police van, Reverend Daughtry celebrated living in a country that allows dissent, and promised “someone will be here every day to get arrested.”

“We may have to take over this office,” Reverend Daughtry said. “We intend to be heard and to get justice.”