New York, NY – Redesigning and reusing vacated properties is turning around neighborhoods all over New 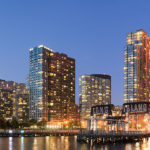 York City. Creative developers are meeting a growing housing demand throughout the Big Apple. Older, outmoded buildings are being transformed into much needed residential, office and retail spaces. Vacated factories  are becoming condos or hotels. Abandoned factories are developed into affordable housing.

Queens is undergoing a building boom  due to an adaptive reuse strategy. In the Long Island City area, more than 11,000 new apartments have been built over the past decade replacing uninhabited buildings.  More than 23 million square feet of adaptive-reuse projects are planned. In Astoria, Queens, the $1.5-billion Hallets Point project includes 4,000 residential units, and plans call for much more re-housing. Highrises are now constructed in sections thought not habitable ten years ago.

A borough-wide transformation of Brooklyn and the Bronx is taking place. Areas once thought undesireable are being developed to beautiful planned communities. Old structures that were condemned are being gutted and rebuilt. There is a growing demand for live and work neighborhoods like Brooklyn’s Dumbo section. Buildings formerly utilized for industrial and manufacturing use are being transformed  into multi-residential properties. These new communities that are emerging from old neighborhoods have area-wide benefits for employment, shopping, and housing.

As we re-build existing structures, update infrastructure, and bring back families to  neighborhoods that have died, communities with historical significance are reborn. What was old and discarded is now new and useful.