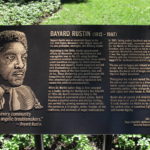 late activist who planned the 1963 March on Washington in his ninth-floor apartment in the union-created apartment complex in Chelsea.

Rustin, who died in 1987 at the age of 75, was a key behind-the-scenes figure in the 20th century’s civil-rights and labor movements. He participated in the 1947 Journey of Reconciliation, an early challenge to bus segregation in the South, for which he served 30 days on a chain gang in North Carolina. He introduced Dr. Martin Luther King to Mahatma Gandhi’s philosophy of nonviolent resistance. He cofounded the A. Philip Randolph Institute in 1964-65, the first “constituency group” in the AFL-CIO, doing voter-registration drives and programs to bring black people into apprenticeships in the building trades, which were then largely segregated.

“We need in every community a group of angelic troublemakers,” he wrote in the late 1940s.

Bayard Rustin was an “iconoclast and visionary… who consistently fought for the rights of the downtrodden,” City Council Speaker Corey Johnson told the more than 150 people gathered on West 28th Street. “For years he did not get the credit he deserved. He was a gay man born in 1912.”

Rustin could have been a professional singer—he performed with Josh White and Paul Robeson in the late 1930s—but devoted his life to activism. In 1941, he worked with Brotherhood of Sleeping Car Porters leader A. Philip Randolph planning a march on Washington to protest segregation, but it was cancelled after President Franklin D. Roosevelt agreed to integrate the defense industry. Raised as a Quaker pacifist, he served two years in prison for resisting the draft during World War II. In 1956, at Randolph’s advice, he went to Montgomery, Alabama to help with logistics and publicity for the bus boycott.

The 1963 March on Washington was originally Randolph’s idea, but Rustin was its main organizer. He brought Dr. King into the coalition, and expanded its demands to “Jobs and Freedom.” As deputy director, he handled everything from articulating the march’s 10 goals—from outlawing segregation to raising the minimum wage from $1.25 an hour to $2—to handling the logistics for buses, first-aid stations, and portable toilets for the more than 250,000 people who turned out. However, some of the coalition’s leaders insisted that he be kept behind the scenes because they didn’t want someone known to be a gay socialist representing the movement.

Rustin was a “master strategist and tactician,” said former A. Philip Randolph Institute president Norman Hill, who worked with him planning the 1963 march. His politics were guided by five principles, Hill continued. He was committed to a society with economic justice and racial equality. He believed in coalition politics, especially the alliance between organized labor and the civil-rights movement. He believed in peoples’ self-liberation, on the grounds that “if you don’t fight for yourself, who will?” And he was committed to the tactics of mass action and nonviolence.

In a landmark 1965 essay, “From Protest to Politics,” Rustin argued that the movement had to “expand its vision beyond race relations to economic relations.” “What is the value of winning access to public accommodations for those who lack money to use them?” he asked. “The civil-rights movement will be advanced only to the degree that social and economic welfare gets to be inextricably entangled with civil rights.”

To achieve this, he said, the movement had to achieve the political power to transform social institutions, through a coalition of “Negroes, trade unionists, liberals, and religious groups”—and not follow the path of moderates who “lack the vision or will for fundamental change” or militants who “lack a realistic strategy for achieving it.” “The difference between expediency and morality in politics is the difference between selling out a principle and making smaller concessions to win larger ones,” he wrote.

That attitude didn’t sit well with a movement that was becoming more frustrated and uncompromising, and Rustin also tried to dissuade Dr. King from speaking out against the Vietnam war. Later on, he worked extensively with refugees, from Soviet Jews to Haitians, and, as the gay and lesbian movement developed, became more comfortable with his own sexuality.

“Twenty-five, thirty years ago, the barometer of human rights in the United States were black people. That is no longer true. The barometer for judging the character of people in regard to human rights is now those who consider themselves gay, homosexual, lesbian,” Rustin said in 1987. “We are all one. And if we don’t know it, we will learn it the hard way.”

Rustin moved to Penn South when it opened in 1962, to an apartment at 340 West 28th St. The 10-building, 2,820-apartment complex was conceived by the International Ladies Garment Workers Union as housing for union members, part of the labor co-op movement that also produced the International Brotherhood of Electrical Workers’ Electchester complex in Queens. After New York’s garment industry declined, Penn South was opened to the general public by lottery.

A limited-equity co-op—residents own their apartments, but can’t sell them for a profit—Penn South remains one of the most successful examples of genuinely and permanently affordable housing in New York City. Maintenance costs are about $900 a month for a two-bedroom apartment, and it was built by union labor. (Disclaimer: I live there, having won the lottery in the 1990s.)

Rustin “believed in the promises of our Constitution,” Walter Naegle, his widower, said at the unveiling. One of his last political acts was being vice-chair of the National Coalition for Haitian Refugees, founded in 1982 to advocate for Haitians fleeing the Duvalier family’s dictatorship who were being detained indefinitely by the Reagan administration. He would be “appalled,” Naegle added, that Haitian refugees in the U.S. are now fleeing to Canada because they fear they will be deported.

Penn South, Naegle said, was the perfect place for Rustin to live, because it “embodies the idea of decent affordable housing in a beautiful setting for working people.”