At the United Federation of Teachers headquarters on Tuesday, April 3, an eclectic group of union leaders, labor lawyers, union pension fund managers and advocates gathered for a Peggy Browning Fund fundraiser to honor three individuals who have dedicated their lives to labor’s cause.

The organization holds 10-week Summer Fellowships for qualified law students who have the opportunity to work for unions, worker centers, the U.S. Department of Labor, union-side law firms and other nonprofit organizations. Two graduates of the fellowship program spoke at the event on Tuesday evening. 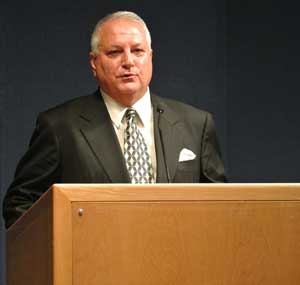 Sonya Zehra Mehta completed the summer fellowship last year and now works for UNITE HERE Local 2 in San Francisco. According to Joseph Lurie, husband of the late Ms. Browning and President and Founder of the Fund, said that because of the lessons she learned on the ground by participating in the summer fellowship, she wrote the labor arbitration brief on behalf of hotel workers in San Francisco who were being forced to do an inordinate amount of work.

“I’m a proud beneficiary of the Peggy Browning Fund, which does exceptional work in encouraging and training law students to fight for workers’ economic betterment. Labor is on the rise,” said Mehta.

Jason Jendrewski also completed the fellowship and currently works as a Trial Examiner for the City’s Office of Collective Bargaining. He said that he had the opportunity to work with the Screen Actors Guild and learned the behind-the-scenes hard reality of actors not getting paid because projects failing due to a lack of funding.

“In addition to being a Peggy Browning Fellow, I also participated in the National Law Students Workers’ Rights Conference where I had the chance to meet fellow law students who were as enthusiastic as me to become advocates for workers and their families,” said Jendrewski.

The first honoree was the former State AFL-CIO President Denis Hughes, who was introduced by the state labor federation’s current president, Mario Cilento, who said that because of Hughes’ leadership, New York’s labor movement is so much stronger.

Hughes noted he was privileged to be part of the Peggy Browning Award Ceremony honoring his two friends, Vincent Pitta and Martin Scheinman.

Hughes said that the labor movement needs a new generation of young lawyers working for unions because “there hasn’t been a time like this in 70 years where labor has been pushed around.”

He added, “It’s hard to find allies, and that’s why this organization is so important because it provides the labor movement with the best and brightest to defend our gains and grow our influence.” 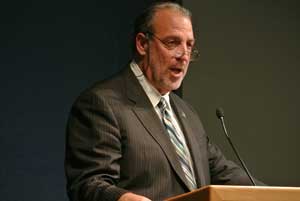 Martin Scheinman, who is an alumni member of the ILR School at Cornell University and has arbitrated over 10,000 disputes, said it was essential to have dedicated and committed people like Mehta and Jendrewski because “we have to educate the next generation to secure the next generation of workers’ rights.”

Vincent Pitta, the founding and managing partner of Pitta and Giblin LLP and the consulting, lobbying and government relations firm of Pitta Bishop Del Giorno & LLC, is the son of an immigrant hotel worker. Pitta noted solemnly that he is not happy with the political road the country is heading as immigrants are demonized and fearful that the continuing attacks on labor unions could potentially negate the freedoms and rights outlined in the U.S. Constitution.

While fearful, “I’m also emboldened by the young people here tonight who have embraced the labor movement,” said Pitta.