NEW YORK, NY — New York City has launched the Lower East Side water route, the sixth and final of 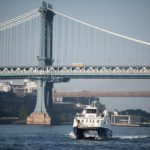 the city’s water ferry system. The new route starts in Long Island City, Queens, proceeds to East 34th Street and two new stops at Stuyvesant Cove and Corlears Hook on the Lower East Side, before ending at Pier 11/Wall Street.

“It’s official – the initial six routes of NYC Ferry system are now up and running,” said Mayor de Blasio. “NYC Ferries have turned the East River, which once divided New Yorkers, into a point of connection – and are helping us build a fairer city for all. With the launch of the Lower East Side route and the connecting NYC Ferry lines, residents of this historic neighborhood now have greater access to the rest of our city.”

Since its launch in May 2017, NYC Ferry has served over 6 million riders across the Astoria, East River, South Brooklyn, Rockaway, and Soundview routes, and recently surpassed 3 million riders in the 2018 calendar year. The recently launched Soundview route is already proving very popular, having served nearly 4,000 riders on opening day, and is projected to serve more than 400,000 additional riders annually. The Lower East Side route, which runs approximately every 25 minutes during peak hours, is expected to serve one million riders annually. Last month, NYC Ferry welcomed the arrival of Ocean Queen Rockstar, the first of six higher-capacity 350-passenger vessels ordered to accommodate high ridership demand. NYC Ferry has already employed over 325 people to fill positions such as captains, deckhands, customer service agents, ticketing, operations and more.

“We’re a city of waterfronts but for too long, those waterfronts were unconnected and disused,” said Manhattan Borough President Gale A. Brewer. “With each new route, NYC Ferry is changing that, linking neighborhoods that had few or no direct transit connections before, and giving thousands of New Yorkers a brand-new, affordable transit option with an unbeatable view. I hope NYC Ferry can eventually expand to serve every community that wants it.”