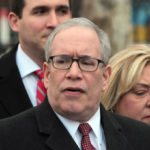 2018, according to the Quarterly Economic Update released by New York City Comptroller Scott M. Stringer. The analysis found that Gross City Product grew by 2.7% from January through March, less than the 3.4% growth in the previous quarter (Q4 2017), but still outpacing the national economy, which expanded by 2.3%.

“While our economy has been strong, weakening economic growth is a reminder that it won’t continue forever,” said Comptroller Stringer. “Over the last few years our economy has gone from a sprint to a jog, and now, with signs of a cooling job market and slowing economic growth, we’ve come to a walk. And while unemployment is at an all-time low, the concentration of job growth in low-wage industries is concerning for those New Yorkers who are trying to get ahead in our economy. We need discipline today, to prepare for the possibility of tougher times ahead. We will continue to monitor the economy’s condition closely, but this quarter’s results highlight the need for prudence in the management of our finances.”

Overall, in the first three months of 2018, private-sector employers added 13,000 jobs. However the distribution of these jobs, entirely in low- and medium-income industries, is cause for concern, especially as high-wage industries, such as information services and financial activities lost 2,200 jobs in the first quarter.