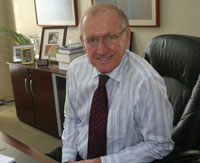 Around Town – By Neal Tepel

In this update of its annual New York City Construction Outlook report, which was released in October 2011, the Building Congress projects overall construction spending will reach $28.8 billion in 2012, before falling to $25.1 billion in 2013. This updated forecast shows a modest improvement from the initial October report, which primarily reflects significant anticipated increases in residential construction activity.

The near-term outlook, however, shows cause for considerable concern. The Building Congress forecasts government construction spending to decline to $12.7 billion in 2012 and $9.6 billion in 2013. If the projection holds, the 2013 numbers would represent a 40 percent decline in public sector spending from 2010.

“To its credit, the government sector, led by the Bloomberg administration and the Metropolitan Transportation Authority, has been an abundant and vital source of industry jobs and strategic investment since the Great Recession,” said New York Building Congress President Richard T. Anderson. “By forging ahead with transit expansions, road work, environmental projects and parks development, these entities have helped stimulate the economy while also preparing for the next economic recovery.”

Mr. Anderson added, “The strains are starting to show, however, and agencies are bracing for a severe downsizing of their budgets. If this happens, it may take years to recover. Like an ocean liner, it is virtually impossible to quickly reverse course on massive, multi-year capital programs.”

Better yet, the Building Congress is projecting a dramatic resurgence in residential construction in the coming years – with spending reaching $4.8 billion in 2012 before climbing to a non-inflation-adjusted record of $6.8 billion in 2013. The improved forecast is based on a preliminary review of recent residential permitting data.

Non-Residential
Non-residential construction, which includes office space, institutional development, sports/entertainment venues and hotels, held steady – from $10.0 billion in 2010 to 10.1 billion in 2011. This sector was bolstered by ongoing work at the World Trade Center, Barclays Arena and Madison Square Garden.

The Building Congress forecasts non-residential construction to increase to $11.2 billion in 2012 before falling to $8.6 billion in 2013. At present, there are a fair number of large-scale mixed-use projects that have been proposed and approved. Should the economy continue to improve, the developers for a portion of these projects may be able to obtain the financing necessary to get them started.

“It is certainly gratifying that the residential sector continues to rebound, but the New York City construction market is heavily reliant on public sector work, which is expected to decline significantly over the next two years,” Mr. Anderson said. “The building industry needs to continue working with its partners in government to move the needle higher on public capital budgets and secure dedicated funding for vital infrastructure initiatives.”