In recent years, there’s been plenty of conversation in America about income inequality, and the 1 percent 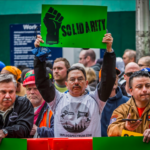 versus the 99 percent. People have asked how corporate and CEO incomes can rise so high, while working-class and middle-class wages stagnate.

When will corporate greed reach such levels that workers truly fight back?

We recently witnessed arguments in a Supreme Court case—funded and pursued by billionaire Republicans – that would devastate public-sector unions. We’ve seen strikes by brave teachers in West Virginia demanding human dignity and adequate wages. Journalists at the Los Angeles Times finally unionized as a culmination of efforts set in motion more than a century ago.

Construction workers are saying “count me in” as part of the fight against corporate greed. We are demanding fair wages, benefits, and working conditions from those who develop the luxury apartments where we could never afford to live—and the high-end commercial space where we will never occupy a window office. “Count Me In” wants every worker treated with dignity and respect, regardless of race, gender, religion, ethnicity or sexual preference. It means, “I am here. I will not be silent, so recognize me as a human being because I will be counted.”

And, true to form, the moneyed interests are recoiling.

In New York City this movement has gained so much traction that one company, Related – in concert with its affiliated construction manager, Hudson Yards Company (HYC)—has threatened to fire workers wearing “CountMeIn” stickers on their hardhats. Top executives from Related—whose global portfolio comprises some $50 billion worth of real estate assets owned or under development—even verbally berated union members wearing “CountMeIn” stickers, demanding they be removed or else individuals wearing them would not work anymore. One brave individual responded, “No, I just won’t be working for you anymore.”

This campaign was launched because members understand that corporate greed lacks limits. Today a developer picks on one union providing retiree pension benefits. Tomorrow it picks on a union that provides retiree medical benefits. The next day it picks on one providing vacation benefits. Soon it picks on those offering paid holidays, break time, safety protections, and fair wages. Workers ask, “When is enough enough?”

In its zeal to quash this movement, Related filed a lawsuit against the Building and Construction Trades Council (BCTC) of Greater New York and its leadership. The lawsuit aims to discredit the council and its president, Gary LaBarbera. Related took the extraordinary step of personally suing Gary, singling out a man who has spent his entire life working for the labor movement,.

So, after every construction union had negotiated a fair deal with Related to build Hudson Yards on Manhattan’s West Side, Related and HYC – after nearly six years of virtual silence – suddenly spin around and try to blame us for their own failures to reap the savings we had negotiated.

The culprit was always standing right there in the mirror. Nevertheless, Related blames the BCTC for numerous supposed supervision and payroll errors.

Just days after the lawsuit was filed, a series of attack ads suddenly starting popping-up around New York City from the so-called Center for Union Facts. The Center and its founder, Richard Berman, have already been discredited as nothing more than a “bought and paid for” front for corporate greed. By way of example, Berman and his front groups have advocated against The Humane Society and Mothers Against

Drunk Driving, opposed minimum wage increases, defended the makers of Agent Orange, supported the tobacco industry, and opposed food safety measures. The coincidence of the ad campaign launching right after the lawsuit is worth noting. Could they be related?

Frederick Douglass said, “Power concedes nothing without a demand.” Whether we are cops, firefighters, teachers, nurses, bus drivers, home aids, hotel workers, secretaries or any other working- or middle-class person, these unyielding attacks on our livelihoods must end.

The billionaire-class can only profit from our hard work, sweat, and tears. If they have to settle for being only millionaires so we can make a fair and honest living, we’re ok with that.

#CountMeIn is sending a message to developers that they cannot divide, separate or ignore us in our fight for fairness – and for what we deserve.