NEW YORK, N.Y.—More than 800 graduate-student workers have been on strike at the New School since 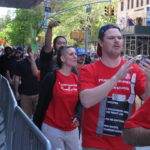 May 8, demanding that the university give them a first contract with wage increases, health care, and tuition remissions.

Graduate students who work as research and teaching assistants signed cards to join the Student Employees at the New School-United Auto Workers in 2014, but the university did not begin bargaining with them until last August, after the National Labor Relations Board rejected its claim that they couldn’t unionize because their jobs were part of their studies.

Since then, the New School administration has “come back with absolutely paltry proposals that do not help our members in the precarious situation they’re in,” says SENS-UAW bargaining-committee member Raven Hetzler, a research assistant working on a master’s degree in economics.

Unlike graduate workers at most private universities, those at the New School don’t get any reductions in their tuition, SENS-UAW members say. They also don’t get health insurance. All they get is their hourly wage—a minimum of $13 an hour, $18.40 for research assistants, says Hetzler.

“We pay tuition as well as give our labor. We’re paid a wage, but it’s not a living wage,” Eli Nadeau, a teaching assistant working on her Ph.D in politics, told LaborPress on the picket line May 8. Her pay was so low that she qualified for Medicaid until this year, she said.

“We remain committed to reaching a strong, fair contract as quickly as possible and stand ready to continue negotiations on an agreement that reflects the best interests of all students, faculty and staff,” a New School spokesperson told LaborPress.

In statements posted online, the university argued that the union’s demands would more than double its labor costs. It said May 6 that it had offered a deal including “guaranteed annual wage increases, a “discounted university service fee,” and a “reduction in the cost of student health insurance.”

“We unfortunately remain far apart on the important economic aspects needed for a contract,” it said.

Both sides agree on that point. The university’s proposals are “very far afield” of the union’s, psychology research assistant Kevin Rice said while picketing in front of the school’s main building on Fifth Avenue May 11.

The university is offering a wage increase of less than 1%, Rice said—less than what graduate workers got in the previous two years. Its health-insurance proposal offers “practically nothing to almost nobody,” says Hetzler: It would give them a $300 rebate if they join the university’s $3,000-a-year health-insurance plan, and because only those who are scheduled for work for at least two semesters in advance would be eligible, very few graduate workers would qualify, he explains.

The SENS-UAW strike isn’t the only labor dispute at the New School. Students occupied the cafeteria May 1 to protest the university’s plans to cancel its contract with Chartwell, a unionized food-service provider, and run the cafeteria itself—laying off about 50 workers and letting them apply for new jobs. The university and UNITE HERE Local 100 announced May 7 that it would continue its “current operating agreement” with Chartwell and negotiate a new contract with the union. Occupiers said they would not leave the cafeteria until those deals are in writing and have been ratified.

Hetzler says that situation illustrates the New School administration’s “seeing the workforce as an area for cost-cutting.” “They don’t like unions here,” he says. “It’s a shame, because the legacy of this institution is incredible radical and progressive.”

The New School has at least recognized the graduate-workers union, unlike Columbia. “They won’t even negotiate with us,” says Kate Jackson, a bargaining-committee member of Graduate Workers of Columbia-UAW Local 2110 who joined the New School picket line May 11. The NLRB last year rejected both of Columbia’s arguments against having to accept the union, that graduate assistants were not legitimately workers and that the recognition vote where the union won more than 70% was tainted by fraud. But Jackson says the administration is refusing to begin contract talks even though it knows that’s illegal, claiming a “principled difference” with the law.

The GWC-Local 2110 is considering whether to sue Columbia in the courts or go through the NLRB, Jackson told LaborPress. If it went to the NLRB, she says, the board’s Obama-era ruling that graduate-student workers can unionize would probably be sustained by a 2-2 deadlock, as Trump appointee Marvin Kaplan would have to recuse himself because his wife works at Columbia. If it went through the federal courts, the 2nd Circuit Court of Appeals would probably be favorable—but the Supreme Court might not be.

How to Cancel a Credit Card Without Hurting Your Credit Score