Joseph Lhota, Chairman and CEO of the MTA, opened his remarks at a construction industry forum on Tuesday, April 3 by thanking the members of the New York Building Congress for lobbying hard to ensure that the remaining three years of the MTA’s current five-year Capital Project is completely funded to complete four mega-projects currently under construction.

LaborPress asked Lhota now that the MTA doesn’t have to worry about financing the current Capital Project program, will that help the MTA to bring down its debt service?

“It doesn’t change the debt service one iota,” said Lhota.

He also said, “The amount of debt in the Capital Project is there by virtue of the fact that we have real live projects that we are using the debt for.”

Lhota then ticked off the benefits that the MTA’s transit system provides for the $1.4 trillion regional economy.

“Our transit system enabled the area to grow. The rebuilding of the city’s transit system went hand in hand with the region’s economic resurgence. We now have 7.7 million riders a day. Subway ridership has increased by 50 percent—the highest level since the 1950s—weekend service levels are the same as they were in the late 1940s and jobs have grown by one third.” 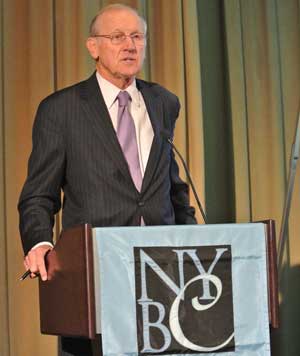 He then showed the audience pictures of the progress being made on the four mega-projects—2nd Avenue Subway, East Side Access, 7 Line Extension and Fulton Street Transit Center—and how each contributes to his vision of linking all the city’s transit assets to create a regional transit powerhouse.

But the missing puzzle he’d like to add to realize his vision of a fully-connected mass transit system is bringing Metro North service to the West Side, “which is the nation’s largest commuter rail system,” Lhota said.

Lhota worries that projections of 1.8 million more people living in the city by 2035 will constrain the transit system if nothing is done.

“Ridership is changing. There are no more peak periods as traffic is now mostly constant.”

After the four mega-projects are complete, Lhota believes that one way to forestall a strain on the system as the population grows is to add more trains.

“Rather than trains arriving every six minutes, we can expand service by adding more trains that arrive every three minutes.”

Another way would be to lengthen rather than widen train stations.

“Brooklyn is growing by leaps and bounds, but some stations only have one entrance. We can lengthen our stations by constructing four entrances,” Lhota noted.

Lhota favors the development of high-speed rail as he said he is in support of Amtrak’s Gateway Project to build new tunnels between New York and New Jersey and the construction of a Penn Station South to accommodate the additional capacity.

But he is not in favor of extending the 7 line to New Jersey.

Mr. Lhota said it would be too expensive for the agency to build the extension for New Jerseyans to ride into New York at $2.25, although NJ residents can already ride from Newark to New York via the PATH at only $2.00. “Not a chance. It’s not going to happen. Not in our lifetime. Not in anybody’s lifetime.”

Lhota concluded by saying to the construction industry’s participants, “We’ll need new revenue sources to enable the system to accommodate future ridership in growth. Transit needs champions like you so that we can take advantage of the assets we have.”