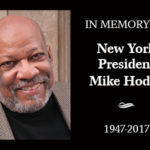 age of 70. Just last month, he was re-elected. He was initially elected President in 2009. Hodge was also a Broadway actor who appeared in such productions as Fences and A Few Good Men. He also acted in commercials, films and television, including Law and Order. He was an award-winning audio-book narrator as well.Hodge began his union leadership by winning a seat in 2001, inspired by his union-member father. After winning the presidency in 2009, he co-chaired several negotiating committees on which he had previously been serving. He served on the union’s G-1 committee that created the framework for the 2012 merger of SAG and AFTRA. He was also active in several committees: National and New York Executive; Professional Representatives; TV/Theatrical Negotiating; Basic Cable Negotiating; Network Code Negotiating; Corporate/Educational and Non-Broadcast Negotiating; Organizing; Government Review; and Communications.

He also served as a member of the New York State AFL-CIO Executive Council, the City Labor Council, and as a trustee to the Industry Advancement Cooperative Fund. He was important in the establishment and extension of the N.Y. film production tax incentive, and in the strengthening of the N.Y. Right of Publicity law. He worked with New York’s elected officials to create the city’s entertainment industry internship program, which improved diversity behind the camera.

“Mike’s spirit shone brightly, and he was greatly admired by those he worked with, whether in the union’s boardroom or on set. He will be remembered for his professionalism, conviction and remarkable strength of purpose,” said SAG-AFTRA President Gabrielle Carteris. “His perseverance and ability to rally members helped make merger possible, and in that regard, SAG-AFTRA stands as a memorial to his accomplishments, leadership of the New York Local and everything he believed in.”

Rebecca Damon, first VP of the New York local, announced his passing on Sunday night on her Facebook page, writing:

“Mike Hodge was a powerful unionist, a remarkable leader, and more than anything, a great friend, colleague, and mentor. He led our local through several challenging years and into the momentous merger. He built on that powerful foundation to bring cohesion and stability to our local and helped build the industry economy on which New York members’ careers now thrive. His vision and leadership made us stronger and justifiably prouder. Alongside the pain of losing Mike, I urge us all to remember his extraordinary achievements on behalf of SAG-AFTRA and Screen Actors Guild before it.”