Labor Pumps Up The Volume Against SUNY Downstate Layoffs

Labor Pumps Up The Volume Against SUNY Downstate Layoffs 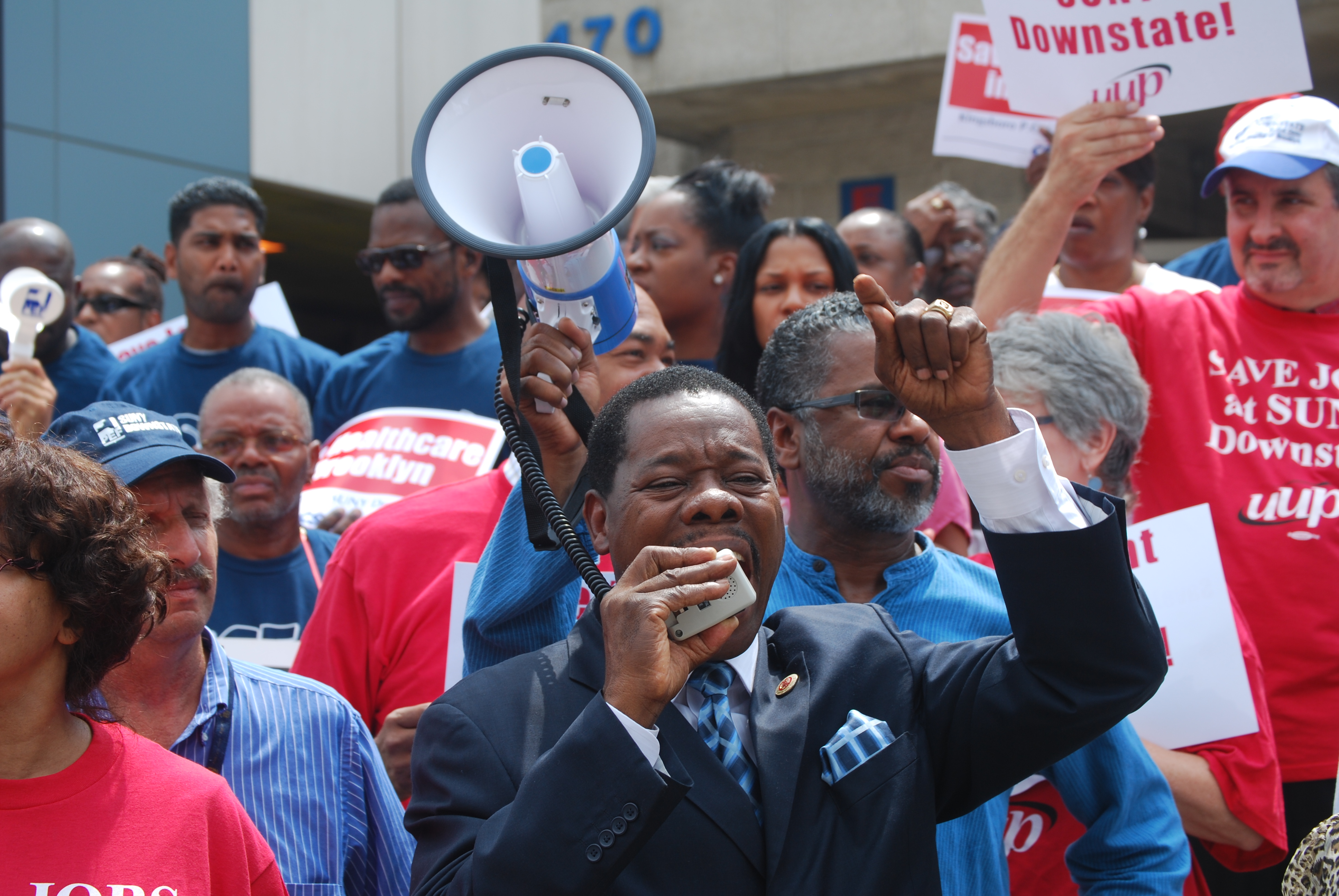 Union workers at SUNY Downstate Medical Center in Brooklyn staged their largest and loudest protest of the summer on Wednesday afternoon, hoping to at least forestall a new round of layoff notices that many fear will be devastating given the poor state of the economy.

“Yes, I’m definitely dreading the weekend [when layoff notices are expected to be sent out],” said six-year administrative assistant Joanne Fraser. “I have a child, a mortgage payment and school payments. If I lose my job, there goes my income.”

SUNY Downstate Medical Center is in the midst of a restructuring effort to help close budgetary shortfalls. But without help from Governor Andrew Cuomo, many workers fear that those efforts translate into being shoved onto the unemployment line.

“It’s a shame because we love SUNY Downstate,” said a member of the housecleaning staff who did not wish to be identified. “We’re sad to see anyone go.”

“We’re scared,” said another staffer who also did not wish to be identified. “No one wants to lose their job. You’ve got bills to pay and kids to take care of. It’s hard.”

Unlike demonstrations previously held outside SUNY Downstate earlier this summer – this one enjoyed the physical support of a host of local elected officials quick to point out the impact potential layoffs will have on the greater community.

“We cannot allow this hospital to deteriorate,” New York State Assemblymember Alan Maisel said. “We need every job here. When they cut jobs, they are cutting services. The more jobs they cut, the more difficult it is for this hospital to fulfill its mission.”

Vocal representatives and rank & file members from UUP, PEF, CSEA, SEIU and the New York State Nurses Association showed up in such force that hospital security had to scramble just to maintain a clear walkway to the entrance at 470 Clarkson Avenue.

Thus far, the push back against looming layoffs at SUNY Downstate Medical Center has generated 7,000 signatures on a petition to be presented to Governor Cuomo – and an audit of the institution’s financial status from New York State Comptroller Thomas DiNapoli.

A spokesperson for the comptroller declined to provide a timetable for when that audit – undertaken less than three weeks ago – might be completed. But said that audits typically take anywhere from six months to a year to complete – although there have been cases where audits have been expedited.

Looking ahead to increased traffic and the opening of the Barclays Center in Downtown Brooklyn this fall, Rabbi Eli Cohen, executive director of the Crown Heights Jewish Community Council, denounced any cutbacks that might also necessitate services being transferred to other facilities.

“We don’t need to get caught in stadium traffic going to Downtown Brooklyn to get services,” Rabbi Cohen declared. “When a person is ill, they need to have their family to be able to come over in a few minutes to bring them what they need, give them support and make sure they are being treated.”

When asked, Ronald Najman, director of Communications and Special Projects for SUNY Downstate Medical Center insisted that “High quality patient care and medical education have always been and will remain our top priority,” but did not specifically say how that might be achieved with fewer hospital workers.

“The government has a moral responsibility to provide to people the best medical care possible,” City Councilmember Mathieu Eugene said. “And the only way for the government to do that is to save the jobs of the people who are working in health care.”

Assemblymember Nick Perry warned, “The worst thing you can have at a health care facility is understaffing.”

Members of the Brooklyn Delegation say they are working hard to convince Governor Cuomo to help supply funding for SUNY Downstate Medical Center and avert layoffs.

Members of CSEA put elected officials on notice during the rally that they will only support those in office who support labor’s fight to avoid hospital layoffs.

Even with pink slips hanging over their heads and a general atmosphere of anxiety dominating the workplace, dedicated SUNY Downstate staffers at this week’s rally remained steadfast.

“Even though you’re anxious, you still have to go on,” Fraser said. “You can’t give up, and I think that’s why most of the people are out here – because they’re not ready to give up.”