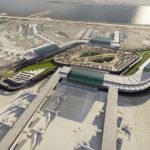 Airport using mostly non-government funds and union labor is a model for the country.  Of the $13 billion, $12 billion will come from private funding, including Ullico Inc., the Carlyle Group and JLC Infrastructure.

The JFK redesign and upgrade is one of the largest U.S. public-private partnership projects developed within the country. Its planning is unique and included business, labor, government, community groups and the airline industry.  Financial partners included the Carlyle Group and its dedicated airport platform, CAG Holdings, JLC Infrastructure, Ullico and Munich Airport International.

Sean McGarvey, president of North America’s Building Trades Unions, said in a statement the project “will allow the pension funds of our hardworking union members to invest in critical infrastructure and put over 4,000 union members to work, while also supporting 8,000 permanent jobs upon completion.”