The Jewish Labor Committee honored three labor leaders and the President and CEO of Montefiore Medical Center, where a strike by the New York State Nurses Association was just averted, at the 41st Human Rights Awards Dinner at the New York Hilton. A long list of current and former labor luminaries was present, including the current AFL-CIO President Richard Trumka.

Richard Trumka told LaborPress that the challenges and opportunities for the AFL-CIO in 2012 are one and the same. “That’s electing the President to maintain a friend in the White House, maintaining a majority in the Senate and reelecting a progressive majority in the House.” 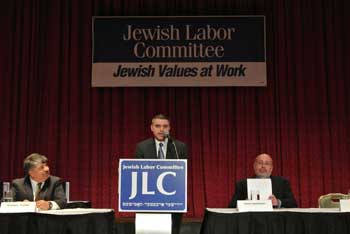 He also said a 2012 priority is the need for good legislation to regulate Wall Street, to make fair changes to labor law, strengthening health and safety regulations, and not the least of which, hopefully organize new workers.

Trumka said in response to the “Insourcing American Jobs Forum” on Wednesday at the White House, which included a number of manufacturers who have relocated production work back to U.S. shores, “When the President talks about insourcing, and supports unions the way he has, that’s a good sign.”

According to a White House press release, 334,000 manufacturing jobs have been created in the past two years, while manufacturing production has increased by about 5.7 percent on an annualized basis since its low in June 2009, it’s fastest pace in a decade. 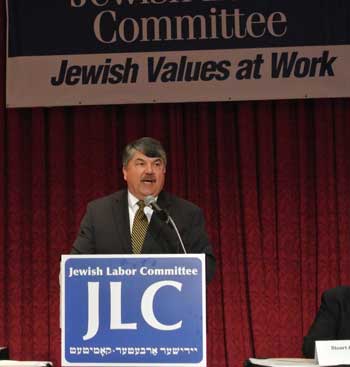 President Obama will soon announce new tax proposals to expand insourcing, but Trumka said, “Will it [tax proposals to reward companies that choose to invest or bring back jobs to the U.S.] end all of the nonsense that employers go through? No. But it’ll make it more difficult for them to try to go after workers and unions.”

Stuart Appelbaum, President of the RWDSU and the JLC, opened the honorary dinner with a wide range of remarks that touched upon Occupy Wall Street, the big banks and Israel. “The big banks like JPMorgan Chase & Co., Wells Fargo and Goldman Sachs will not rebuild the middle class, only a strong labor and union movement can.” He noted that the city labor movement quickly stood up to the anti-Semitic charges levied against OWS by the “right-wing hate machine that’s being funded by the corporations seeking to reduce labor’s impact and role in civil society.”

On Israel, he pointed to the increasing threats to Israel in the Middle East, as tensions are intensifying especially with Iran, but also commendably signaled out Israel’s Prime Minister Benjamin Netanyahu hardline stance on going forward with Israeli settlements in the West Bank.

Appelbaum also talked about the JLC’s rich and activist history, founded in 1934 by Yiddish-speaking immigrant trade union leaders including the International Ladies’ Garment Workers Union, the Amalgamated Clothing Workers of America, the Workmen’s Circle and the Jewish Daily Forward determined to resist the rise of Nazism in Europe. 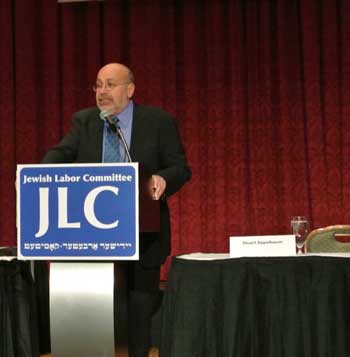 Before introducing Trumka, Appelbaum mentioned the names of other labor luminaries in the audience, including the former SEIU President Andy Stern, who’s the subject of a recent book about the bitter labor battles between Stern and health care locals in California.

Trumka had the honor to present the first human rights award to Matthew Loeb, International President of I.A.T.S.E, who told the audience that he grew up with two Jewish parents in Cleveland. He didn’t go to Hebrew school, but his parents bought him a series of tapes to help him learn passages from the Torah in order to be Bar Mitzvahed.

He reflected interestingly on when he used to look at his family photo albums as a youth and the one photo that made an everlasting impression on him was his grandfather about to take a blow from a policeman’s billy club during a strike in 1935 at the Fisher Auto Body plant.

“My grandfather was a watchmaker, he lived modestly, but he had a social conscience and knew that working people deserved a fair shake.”

He’s happy he now sees a resurgence of social conscience in the country after last year’s unrelenting attacks on labor. “Now, after all these fights, there’s an assault on us. I’ll be damned if my grandfather took a knock on the head for nothing,” said Loeb. 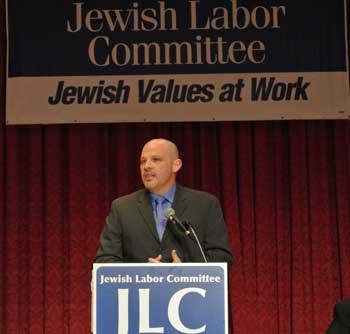 The new President of the New York State AFL-CIO, Mario Cilento, before presenting the former president, Dennis Hughes, with the human rights award, said that he was mulling over the type of speech he would give in honor of Hughes, but concluded that, “You can’t measure someone’s passion and commitment in this [union] movement.”

Cilento credited Hughes for his many accomplishments and leadership during his tenure, which has positioned the organization for sought-out opinions by politicians, the media and community groups.

For his part, and maybe his parting words to New York’s labor movement, Hughes said he was impressed by the different labor leaders mingling and talking with each other in the ballroom before the presentations began. The one lesson the leaders should take after leaving, he said, is, “Get to know each other’s struggles and be there for each other. When one union is at a disadvantage, another union is not advantaged.”

George Gresham, President of 1199SEIU United Healthcare Workers East, presented with his award from UFT President Michael Mulgrew, reminded the audience of the abuses he suffered under segregation growing up in the South, which helped him to identify with the Jewish experience.

“The one lesson I learned growing up under segregation is that southern white society didn’t hate just me, but Jewish people too. My grandfather purchased a CB Radio and we would listen to truck drivers talking about how they equally hated niggers and Jews.”

These experiences stuck with Gresham, and consequently lead him on the path to fighting for civil rights. They also led him to respect the pioneering work of Leon Davis, who was awed by the amazing skill Davis employed to organize workers in the Depression-plagued 1930s’ economy.

On the eve of the Martin Luther King holiday, Gresham said, “It’s important for us to reflect on the world we want, but reflection isn’t enough. We need to make the dream a reality.”