Head Over Heels: Go-Gos Musical Has Charm and Lively Music

Head Over Heels, a musical based on songs by the 1980s band the Go-Gos, stars Rachel York, Jeremy 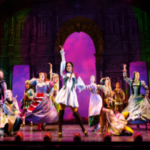 Kushner, Bonnie Milligan, Alexandra Socha, and Peppermint. All the actors work hard, have good voices and attempt to put a jukebox musical across so it is pleasing and entertaining.

The show, at the Hudson Theatre, contains 18 songs by the Go-Gos (whose core members were singer Belinda Carlisle, guitarists Jane Wiedlin and Charlotte Caffey, bassist Kathy Valentine, and drummer Gina Schock).  It begins with a show-stopping number, “We Got the Beat”—a hit from their number-one 1981 album, Beauty and the Beat—and includes “Our Lips Are Sealed,” “Get Up and Go,” “Vacation,” “Here You Are,” “Mad About You,” and their version of the 1966 song “Cool Jerk,” all played by a spirited female band.

Directed by Michael Mayer, Head Over Heels is a silly but lively show, an over-the-top production with disparate parts that are not tied tightly together to enable it to be an impressive whole. The plot is based on Elizabethan-era writer Sir Philip Whitty’s “Arcadia,” a story about love, same-sex love, and gender identity. It takes us to the mythical kingdom of Arcadia where the farce takes place through love gained, love lost, and love found.

If you enjoy a silly farce with music but which can be confusing, you will enjoy this musical. It’s not a show for the entire family due to its R-rated theme, but adults who enjoyed the Go-Go’s music in the 1980s will find Head Over Heels a worthwhile venture.