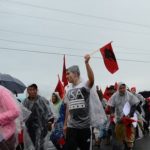 celebrated its fiftieth year by launching a boycott of Reynold’s Vuse E-Cigarettes.  FLOC Organizer Catherine Crowe says their membership has been targeting Reynolds American and other tobacco companies for over a decade.
[Catherine Crowe]: “We see abuses in the fields in the fields in North Carolina, South Carolina, Kentucky, wherever there’s tobacco, we see a lot of violations going on: wage theft, child labor, issues with pesticides, unfair working conditions.  And when workers try to organize and speak out against those abuses, there’s oftentimes retaliation because they’re not protected.  We’ve been asking from Reynolds for the last ten years that they sign an agreement with FLOC that guarantees farm workers freedom of association, which would mean that farmworkers could come together, negotiate with their employer and not risk being fired for doing so.”

[Catherine Crowe]: “We see immigration threats used to silence workers from organizing and for filing lawsuits and trying to resolve issues.  We see white supremacy in groups like the KKK, neo-Nazi groups and the alt-right, but we also see it in a lot of governmental policies that are being pushed right now, racist laws that affect us.  We’re seeing that DACA’s being targeted right now, and we see that as a racist attack against our people.  So, we’re marching against not just racist Neo-Nazi groups and white supremacists, but also against racist government policies. Read more