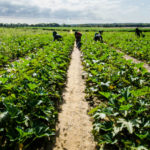 times. That kind of scorching heat can be deadly, especially for people doing physical labor outdoors.

The federal Bureau of Labor Statistics recorded 39 deaths and more than 4,000 injuries from on-the-job heat exposure in 2016, numbers the consumer-advocacy group Public Citizen says “are in all likelihood vast underestimates due to underreporting.” In heat exhaustion, the body loses essential fluids and salt, usually by excessive sweating. In heat stroke, the body loses its ability to sweat, and its temperature can rise to life-threatening levels of 106° or higher within 15 minutes. Yet only three states, California, Minnesota, and Washington, have workplace heat-exposure standards, and the federal government has none.

On July 17, Public Citizen and more than 130 organizations, including eight major labor unions, filed a petition urging the Department of Labor to adopt similar protections. It says employers should be required to give workers water, rest periods, and shaded areas to rest in on hot days, and to establish emergency medical procedures for heat illness.

“We received the petition yesterday morning and it’s under review,” a Labor Department spokesperson said July 18. The federal Occupational Safety and Health Administration recommends that employers take similar precautions, but does not mandate them.

OSHA has refused to create heat-stress standards several times since 1972, Public Citizen said in a report titled “Extreme Heat and Unprotected Workers,” despite three recommendations from the National Institute for Occupational Safety and Health. The report estimated that during the July 1-5 heat wave this summer, more than 2 million workers in agriculture and construction worked in “extreme heat,” usually 95° or hotter, for several days straight.

In agriculture, heat-related illness “now surpasses pesticides as a cause of worker fatalities,” farmworker-safety expert Dr. Marc Schenker of the University of California at Davis said at a press conference announcing the petition. But he added that “the adverse effects of heat exposure are completely preventable with the very basic tools of rest, water, and shade.”

The petition says farmworkers who do heavy labor should be limited to working 15 minutes an hour if the “wet-bulb globe temperature,” a measure of heat stress in direct sunlight, is above about 85°—roughly equivalent to a 90° day with moderate humidity and a slight breeze.

Global warming will make these hazards worse, the report adds. It projects that the annual number of “dangerous heat days” in 133 U.S. cities, when high temperature and humidity push the heat index over 104°, will have more than doubled from 2000 to 2030, from an average of 20 days to 44 days. That would mean about 125,000 agriculture workers and 700,000 construction workers will spend more than 30 days a year working in extreme heat.

California’s heat-safety law, enacted in 2005, requires employers to give outdoor workers one quart of water every two hours, access to shade when the temperature is over 80°, and at least 10 minutes of rest every two hours plus medical monitoring when it’s above 95°. It had been held up for 15 years, but was enacted after the deaths of several farmworkers, including 53-year-old Asuncion Valdivia, who collapsed and died of heatstroke near Bakersfield in 2004 after picking grapes in 105° weather for 10 hours. Rep. Judy Chu (D-Calif.) who sponsored it as a state legislator, says she is preparing a bill to set national heat-safety standards.

California’s state OSHA, the report says, does 50 times as many inspections that result in a citation or violation for unsafe heat-exposure practices as does the federal OSHA, which has to prove that employers failed to fulfill their “general duty” to keep workplaces safe. The farm workers who benefit most from the state standards are nonunion, said United Farm Workers of America President Arturo S. Rodriguez, because “we use our UFW contracts to enforce government protections at unionized farms.”

Heat-related injuries are more likely to be not reported, the petition says, because both agriculture and construction rely heavily on immigrant workers, who are vulnerable to retaliation, especially in farming. That kind of pressure also affects union members, however. United Airlines catering-truck driver Arthur Fatu, a UNITE HERE member in Houston, said that when he got dizzy from the heat while cleaning a plane, he didn’t feel like he had time to get his water out of his truck, because “I feel a lot of pressure from management to work fast.”

Beau Easter, a Communication Workers of America Local 6210 shop steward in the Dallas suburb of McKinney, described how a fellow AT&T premises technician was taken to the emergency room in an ambulance for heat exhaustion. He’d had texted Easter that he was getting nauseous and dizzy from the heat—typical symptoms—but when the boss found out, he called the technician and told him to go back to work. When Easter arrived at the site, he “could tell by looking at him that he wasn’t right,” and called 911.

Another issue is acclimatization: Workers who are not used to heat are much more at risk. Among 23 deaths OSHA issued heat-safety violations for in 2011-12, 17 were workers on their first three days on the job, and eight had been on their first day.

In July 2008, farmworker Audon Felix García died of heat stroke five days after he arrived from Mexico’s Zacatecas state for a summer job in California. He passed out in a truck’s passenger seat after loading 25-pound boxes of grapes in temperatures over 110°.

“If a job consists of being out in the sun working long shifts in the worst conditions, employers need to protect their workers,” his brother, Raudel Felix Garcia of the United Farm Workers Foundation said during the press conference. “I don’t want any more families to go through the pain that my family went through. I am here to demand safe working conditions for the ones who lift up this country with all the hard work they do laboring under a fireball in the sky. We cannot lose more lives.”