DC 37 members stood on the steps of the former Occupy Wall Street encampment at Zuccotti Park on Saturday, March 10, and relying on the “human microphone,” they voiced their opposition to Governor Andrew Cuomo’s proposed Tier VI pension plan, which the union says will lead to reduced benefits and an increase in the retirement age.

Joined by Reverend Billy and The Church of Life After Shopping, an activist performance group, and the Greater New York Labor-Religion Coalition, DC 37 members chanted “No Tier 6.”

An AFSCME spokesperson said, “Tier VI represents a 40 percent reduction in retirement benefits. That kind of reduction, while the average salary of DC 37 members in New York is about $19,000, does not move New York forward. We’re very disappointed with the Governor’s proposal.” 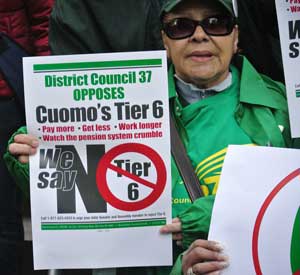 One aspect of Tier VI calls for the establishment of the ubiquitous private sector 401(k) defined pension plan, which the spokesperson said would result in “basically placing union members’ hard-earned money into the hands of the people who brought the economy to its knees.”

The spokesperson also noted that the union calculated a 40 percent reduction based on a 20 percent cut in pension benefits and another 20 percent based on extending the retirement age from 62 to 65.

Oliver Gray, associate director of DC 37, said he and the members were at Zuccotti because the Tier VI proposal shouldn’t even be on the table. “Our pensions at the state and local level are the best funded in the country, so there’s really no crisis,” said Gray.

He added, “Our members can’t live on $19,000 a year in New York. We wonder if the Governor and Mayor are joining the trend of right-wing governors who are stooping to strip working people of their rights.”   Gray mentioned that the union relied on the statistical analysis provided by James A. Parrott, deputy director and chief economist for the Fiscal Policy Institute, an independent, nonprofit research and education organization, which just produced a brief, “How Much Does the Tier 6 Proposal Reduce Employee Retirement Benefits.”

According to the brief, “the typical Employees’ Retirement System-covered employee would receive a pension with a value that is 39.8 percent lower than currently provided under Tier 5.”

Kim Medina, President of DC 1707, who joined DC 37 members in solidarity at Zuccotti and represents workers in Head Start agencies, daycare and homecare centers, told LaborPress that, although her members will not be directly affected by Tier VI because they receive pensions via 403(b) retirement savings plans, said, “We’re here because many of our members’ husbands work for the city and state, who would be adversely affected by Tier 6.”

She noted that for someone receiving only $19,000 requires Social Security to supplement the roughly $800 or $900 monthly payment, but face the dilemma of not qualifying for food stamps because they purportedly earn “too much money.”

“When you have to pay $1,000 for rent because the waiting lists for rent stabilized apartments are so long, it’s a very difficult situation,” said Medina