Chris Shelton, Vice President for CWA District 1, said at a CWA Local 1101 rally outside a Verizon garage on King Street on Friday, February 3, that there has been no progress in the talks on major cost-sharing proposals between the union and the company. “The company still has a lot of retrogressive demands on the table that we’re not ready to agree with, and will never be able to agree with,” said Shelton.

Shelton and Al Russo, Vice President, Southern, for Local 1101, said the rally was held on Friday to show unity and solidarity for the 40 union members still fired after the strike, two of whom are 1101 members, as well as to mobilize the membership for a fair contract. 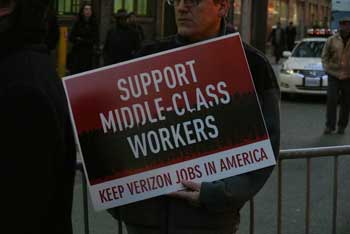 It’s now six months since the CWA leadership agreed to go back on the job after a two week strike in August. Some CWA technicians said during the rally they believed the union should have stayed on strike longer, but at the time the company claimed it would negotiate fairly.

“They told us certain things were going to happen, but they haven’t happened yet,” said Shelton.

“We went back to work with the company’s contention that it would bargain fairly, but we’re at the same place we were when we first went out on strike.”

Local 1101 and five other city locals’ members are still working under the aegis of the old contract for Verizon. The company and the union reached an agreement in August when the strike ended that each side would provide the other with seven days’ notice before taking action, such as another strike or termination of negotiations, Russo noted.

Keith Purce, President of Local 1101, who’s been involved in the bargaining, said the company is not budging on anything. “We’re trying to work with the company on cost-sharing to save money, but we’re at a stalemate. The negotiations are bogged down by endless informational and data requests.”

To illustrate the company’s bargaining tactics, Purce told the membership during the rally that the company is proposing a new job title that pays lower wages and subjects workers being transferred anytime, anywhere throughout the state on the company’s whim.

Anthony, a 15-year Verizon technician and CWA member, said that working without a contract has been tough for him and his fellow co-workers. “We don’t know what’s going to happen. With the company shipping more work out of the country, some of us are worried that we might have to find another job,” said Anthony.

After the city’s public advocate, Bill de Blasio, and the new state AFL-CIO President, Mario Cilento, spoke to the members, District 1’s Shelton implored the membership that they have to tell their fellow union brothers and sisters who didn’t show up for Friday’s rally to give at least four hours of their time each week to send a strong message to the company that, “We will not take your crumbs.”

To prevent that scenario, Shelton again implored the membership to stand up and support each other. “It’s time to stand shoulder to shoulder and go out and kick some ass.”