Nearly two hundred volunteers from Construction and General Building Laborers’ Local 79 shoveled nearly a ton of mulch, planted more than a hundred flowers and grasses, and pried about a dozen old tires from the sandy riverbank.

It was just one of many mornings spent volunteering in local parks — from South Beach in Staten Island to Flushing Meadows Corona Park in Queens. Volunteering strengthens the relationship between the union and local neighborhoods. That can be a big help when Local 79 appeals to local community boards to approve construction projects or work with local City Council members on legislation important to the union. 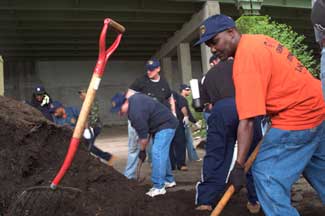 The volunteers often make a big impression. At Riverside Park, when the cart provided by the Park Service wasn’t fast enough, Local 79’s volunteers found wheelbarrows to move mulch from a staging area to the planting site. “I couldn’t keep up with them — I’ve never had a group like that,” said Lynda Miller, who helped organize the event for the Riverside Park Fund.

In the last year, volunteers from Local 79 have also made more than three trips to Flushing Meadows Corona Park in Queens. “Local 79 has probably been our most reliable group, both in terms of consistency and quality of work,” said Matt Symons, Deputy Administrator for Flushing Meadows Corona Park. This Sept. 15, more than 50 volunteers from Laborers’ Local 79 with rakes and shovels moved tons of earth to filled holes and ruts carved into the park’s lawn. “For us to have professional laborers,” said Symons. “It’s very meaningful.”

“Local 79 is doing a wonderful job,” said Estelle Cooper, assistant commissioner for Queens Parks for the New York City Department of Parks & Recreation, on an earlier visit to Flushing Meadows Corona Park May 21, when more than a hundred laborers volunteered.

“We give back to the community, and this is how we do it,” said Jorge Gonzales an organizer for Local 79.