Council Member James Vacca, Transportation Committee Chair, took the three-member MTA panel to task on the agency’s proposed fare hikes next year and in 2015 at a hearing yesterday, March 6. Hilary Ring, MTA’s Director of Government Affairs, said that the 7.5 percent fare hikes would generate almost $900 million, but Vacca was bewildered when Ring said that the revenues would go almost exclusively to paying the agency’s workforce pensions and healthcare costs.

“None of the money from the fare increases would go towards service enhancements or service restoration?” Vacca asked.

“By 2015, increases in just pension and healthcare will be $810 million, so essentially the fare and toll increase is, almost dollar for dollar, being eaten up by our labor retiree costs,” Ring said.

He added, “The transit system is an expensive proposition. The fare increases will go towards the 24 hour, seven days a week of good service we’re providing.” 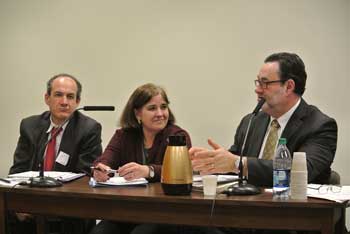 He also told Vacca and the other Council Members on the committee that the agency’s chairman, Joseph Lhota, has said that should there be a windfall in revenues that the agency would otherwise not be expecting, it would direct the monies back into service.

“But we have to be conservative now and assume that that won’t occur,” Ring said.

In his opening testimony to the committee, Ring boasted about how important the MTA’s transit network is to the City’s economic well-being.

“The transit network is, quite simply, the fuel that powers the $1.4 trillion regional economy, which represents a staggering 11 percent of the entire nation’s gross domestic product,” Ring proudly said.

After providing general statements on the MTA’s $12 billion budget, Ring told the committee he looks forward to working closely with them to strengthen the partnership between the agency and the City.

But Vacca, disappointingly, said, “I was expecting more specifics. Your testimony could have been much more illuminating.”

Ring explained that the agency typically plans its budgets four years out. Back in 2007, before the Great Recession, the MTA’s budget assumed certain revenue streams. He compared 2011 revenues generated to the agency’s 2007 expectations and found “some interesting outcomes.”

Ring noted the agency projected dedicated state taxes (corporate and sales) would generate $1.5 billion in 2011, but it actually received $1.3 billion. Revenue from the mortgage recording tax generated only $250 million, while the agency projected $624 million. The dedicated petroleum business tax brought in $621 million, only slightly down from the projected $625 million. And the real estate transfer tax (collected only in the City) was supposed to generate $640 million, but the MTA only realized $353 million.

According to Ring, the City’s contribution to the agency’s $12 billion budget is “relatively small in comparison, but important nonetheless.” The MTA’s 2013 budget is assuming that it’ll receive $45 million for free or reduced school fares, about $14 million for reduced fares for the elderly, approximately $106 million for Paratransit, “or about one-quarter of its costs,” and nearly $90 million for station maintenance at 36 commuter rail stations in the City.

In addition, the City will pay $336 million to reimburse the MTA for the cost of MTA Bus, an agency the MTA created to run former private bus lines at the City’s request.

Vacca then circled back to the 7.5 percent fare increases by saying, “If I do nothing else today, I want to prevail upon the MTA to look carefully before voting on another fare increase. I think there are options out there to mitigate a fare increase, at least for a while.”

He stressed to the panel that people depend heavily on mass transit, and that “we want more people to use it, but we may be dissuading additional riders by raising fares.”

Ring responded that the fare increases aren’t the only source by which the MTA gets capital. He noted also that the agency has achieved billions in cuts in recurring expenses, and notably, the 2013 budget assumes “three years of net zeroes from labor.”

Interestingly, while the MTA’s NYC Transit’s TWU Local 100 workforce’s contract expired almost two months ago, Ring said the agency has already identified cost savings in productivity, work rule changes and health care payments to ultimately achieve a net impact of zero to the budget if “the unions get the increases.”

Vacca also inquired about the real estate assets the MTA jointly possesses with the City.

Ring told the committee that he is hopeful that the agency will be able to receive significant revenues from leasing or selling different parcels. For example, the agency is selling three buildings on Madison Avenue between 44th and 45th Streets, while consolidating its offices at 2 Broadway. The sale, along with some other properties, such as the Jay Street property in Brooklyn, is expected to raise $250 million in revenue.  marc@laborpress.org

Opposition Caucuses Are Uniting and Taking On Entrenched UFT Leadership

Scabs, Strikebreakers and Intimidation: A.G. Steps in to Shield Buffalo Nurses on the Picket Line