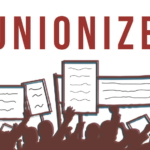 union elections. This will set the stage for union  recognition.

At Brown, a strong majority of the 1,250 graduate employees have indicated support for their union, Stand Up for Graduate Student Employees, and at Georgetown, a similarly robust majority of the school’s 1,000 graduate workers have backed the Georgetown Alliance of Graduate Employees. Both unions are affiliated nationally with the American Federation of Teachers.

Elections overseen by the AAA will occur on both campuses in the coming months to enable teaching and research assistants to bargain contracts with university administrators covering wages, benefits, job security, workplace health and safety, professional development, and other crucial issues. The contracts would be among the first negotiated at private colleges in the United States.

AFT President Randi Weingarten said: “Graduate employees are organizing not just to improve wages and conditions, but to improve the university by having a real say over the work they do. Workers have organized for years to get to this point—having the deep conversations that foster democracy on campus and improve teaching and learning. We are so proud of the activist organizers that see our union as a vehicle for their voice, and we will support them as they campaign for recognition. And hopefully, when they win their elections, we will assist them as they negotiate contracts to benefit generations of employees and the respective university’s students.

While other schools, including the University of Chicago and the University of Pennsylvania, wanted to quash graduate worker voice, Brown and Georgetown have opted to work with, rather than against, their own employees.

“I commend the Georgetown and Brown administrations for rejecting the Trump administration’s attacks on workers and choosing the high road of dialogue and decency. Both schools are on the road of long-lasting partnership with the employees who conduct the research, teach the classes and grade the papers that make their schools run, and we trust their commitment to democracy will not falter as the elections draw near,” said Weingarten.

The AFT is affiliated with graduate unions organizing at Princeton University, Northwestern University, Cornell University and the University of Chicago, in addition to Brown and Georgetown. The largest U.S. higher education union, the AFT represents more than 25,000 graduate employee members across 23 institutions in nine states.