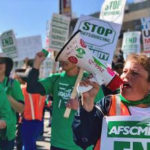 the  University of California (UC) October 23rd. They were joined by other locals in the Bay area.

AFSCME Local 3299  represents support and patient care staff in the University of California (UC) medical and school systems. AFSCME members at UC have been without a contract for 20 months and the administration is not negotiating in good faith.The main sticking points in negotiations with management have been inadequate pay increases, the university’s plan to turn workers’ pensions into 401(k)s, outsourcing of jobs to contractors and health care coverage for workers.

An ongoing battle with the University is the continual increase of outsoucing. At UC, one in six workers  is a contract worker who is paid lower wages, gets few to no benefits and has no voice in protecting their jobs. The expansion of outsourcing is an issue the union must address, according to Kathryn Lybarger, president of AFSCME Local 3299.