Agreement on the economic issues between SEIU 32BJ and the Realty Advisory Board remains elusive as the union that represents almost 22,000 office cleaners in the City is prepared to strike. At a rally at the Sheraton Hotel where the two sides met, December 28, Kevin Doyle, 32BJ’s Executive Vice President seemed to prepare the cleaners of an inevitable strike as he implored them to talk with their co-workers about the seriousness of the current negotiations.

“For 50 years, 32BJ has been building decent jobs and middle-class wages for commercial cleaners. We can’t slide back. We can’t allow the RAB [the multi-employer real estate association] to take back what we fought for the last 50 years,” said Doyle.

Mike Fishman, 32BJ’s President, said the two sides still have not made progress on the one economic issue that remains a thorn in the negotiations, the two-tier wage system. The union claims that the industry is very profitable as the City’s real estate industry is the wealthiest in the world, and therefore can afford to pay the cleaners’ maximum annual salary of $47,000. 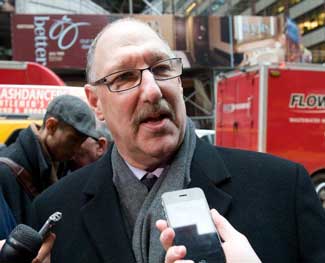 “The building our headquarters is located just sold for $500 million. They [real estate owners] bought the building five years ago for $250 million, making a tidy $250 million profit,” said Fishman.

But Howard Rothschild, RAB’s president, said at a press briefing before the 32BJ rally that, “32BJ cleaning workers’ salaries are the best in the nation… and they get up to 49 paid days off for holidays, vacation, sick and medical time adding up to $76,721 per 32BJ cleaning worker.”

But Fishman quickly responded that “$47,000 is not a whole heck of a lot of money to raise a family in a decent apartment in New York City.”

While 32BJ has reached agreements recently with employers in other cities that protects wages and health care benefits, the City remains the lone holdout. 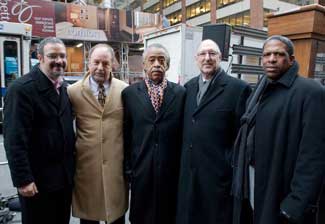 “We’ve been bargaining in eight cities, but in New York where the real estate market is better than anywhere else, the owners want concessions. We shouldn’t be having a problem here.”

Sehadeta Bepic, who arrived in the U.S. from Montenegro 34 years ago, has been a 32BJ union member for 30 years and was almost arrested when the union last struck in 1996. She’s been a cleaner at a Fox News building on 6th Avenue for the past 20 years.

“It’s always scary to strike, but more so now because I’m the sole breadwinner in my family. I haven’t slept for a couple of nights because I worry how I’ll be able to pay my mortgage and other bills. But I’m willing to do it to preserve our livelihoods,” Bepic said.

Ariel Dejesus, who’s been a janitor for the Health Department for the past year, said he and his 22 co-workers are prepared to strike as they despise the idea of the real estate owners pitting workers against each other by deploying a two-tier wage system. 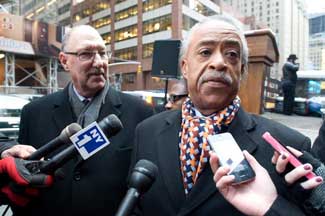