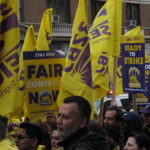 The four-year deal would raise workers’ pay by 11.3%, keep pension and health-care benefits protected, increase funding for training and retirement benefits, and add protections against harassment, the union said in a statement. It will cover doormen and doorwomen, porters, resident managers, handypersons, concierges, and superintendents at 3,500 buildings in the city.

“This agreement honors the valuable contributions of the hardworking men and women who keep our building running and make our city strong,” 32BJ President Hector Figueroa said in a statement. The union called it a fair agreement brought about by “the unity and strength of 32BJ members, combined with a healthy real-estate industry and employers who came to the table ready to negotiate a fair deal.”

The deal came a week before the union’s contract with the Realty Advisory Board, a nonprofit trade group that negotiates on behalf of building owners, would have expired. It happened two days after 32BJ members authorized a strike by voice vote at a rally on the Upper East Side. Gov. Andrew Cuomo, Mayor Bill de Blasio, District Council 37 head Henry Garrido, and national SEIU President Mary Kay Henry also spoke there.

The RAB had wanted a contract that would have required workers to pay part of their health-insurance premiums, but the final agreement would continue employer-paid (premium-free) family health care, a 32BJ spokesperson told LaborPress.

The union’s leadership is urging members to ratify the agreement. “This contract will allow me to continue to provide a decent life for my kids. My dream is to send them to college,” Derbert King, a super in Queens with three children, said in a statement.

“We have won a strong contract by joining together in union, and we will continue to fight together for those who do not yet have a union and suffer under poor conditions and low wages,” Figueroa added. “What makes our union special is that when we win for our families we continue thinking about those workers who also deserve a chance to make ends meet and be able to live in this city.”