New York, N.Y.—The first thing you see when you click on District Council 37’s Web site is a green and 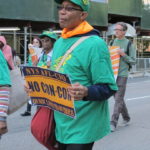 yellow pop-up declaring “NO Con Con!” The cover of the New York State United Teachers’ November magazine reads “VOTE NO” about 20 times. With little more than a week remaining before the Nov. 7 election, New York labor unions are in the forefront of the campaign against Proposal 1, a ballot measure that would authorize holding a convention to revise the state constitution. New Yorkers Against Corruption, the coalition opposing the proposal, is broad enough to include Planned Parenthood Empire State Acts, the New York Right to Life Committee, and the Long Island LGBT Community Center, but the bulk of its more than 100 members are unions or union-related groups, from American Federation of Musicians Local 802 to the Yonkers Patrolmen’s Benevolent Association.

Unions oppose the convention largely because they fear it could remove labor-rights provisions included in the state constitution since 1938. “Our constitution has some of the strongest labor protections in the country including the right to collectively bargain, prevailing rate, pension safeguards, even the eight-hour day,” New York State AFL-CIO political director Ryan Delgado told LaborPress. “When our members cast their ballot on Prop 1, they are really voting on their own livelihood.”

The labor movement “is educating our members on the importance of the constitutional convention question and mobilizing them to get out and vote no with a full-scale campaign,” he continues. “We are holding town halls, running phone banks, and doing labor walks.”

NYSUT, says spokesperson Carl Korn, has engaged in a “herculean member-to-member effort” over the past six weeks to urge a no vote, making more than 100,000 phone calls and distributing more than 300,000 lawn signs and car magnets.

Civil Service Employees Association Local 1000 is concentrating largely on its nearly 300,000 members, says Matt D’Amico, its political coordinator for the New York metropolitan area. It’s been doing phone banking to get out the vote, handing out literature at meetings, and educating members that the proposition will appear on the back side of the ballot, so they’ll have to flip the paper over to vote on it. Because of restrictions on union election campaigning, he adds, efforts to reach the general public are done by New Yorkers Against Corruption.

DC 37, besides working with the coalition, is focusing on informing its members about the constitutional convention. “Polls show that the convention is not on the radar screen of most voters,” an Oct. 10 article in its Public Employee Press newsletter said. Volunteer member organizers have been going door-to-door to canvass members, as well as talking to their coworkers.

“Any way we can, we’re getting the word out,” says Joseph A. Colangelo, president of SEIU Local 246, which represents the workers who maintain New York City’s motor-vehicle fleet. “We started more than a year ago.”

Local 246 has been running articles about the convention “every single month” in its newsletter, he adds, as well as talking about it in meetings and contacting its 1,500 active members and 1,000 retirees through direct mail, e-mail blasts, and social media.

If the convention is approved this November, voters would return to the polls next November to elect 204 delegates—three each from the 63 state Senate districts and 15 at-large statewide. The proposed changes would appear on the 2019 ballot, possibly as individual amendments and possibly as one package. The last time there was a state constitutional convention, in 1967, voters rejected the package.

Supporters of the convention say it’s a once-in-a-generation opportunity to enact reforms unlikely to make it through the state legislature’s partisan gridlock, such as nonpartisan redistricting and public campaign financing. Without a convention, amendments must be approved by two separately elected legislatures before they go to the voters. A Long Island Newsday editorial Oct. 24 dismissed the idea that pensions might be eliminated as “fearmongering,” noting that those and other labor protections were added at the 1938 constitutional convention.

It’s not 1938, responds Matt D’Amico. If today were a “progressive era” like the time of the New Deal, he says, having a constitutional convention would be a good idea. But now, he says, “the forces against unions are very well mobilized and very well funded,” and there’s a “full frontal assault on public employee unions in places like Wisconsin, Michigan, and Illinois,” so “it’s too risky.”

“Outside influences and money will dictate the changes,” warns Colangelo—and that could mean the repeal of constitutional provisions guaranteeing pensions, prevailing wage for construction workers on public projects, and workers’ compensation. It may not be likely that a constitutional convention in New York State would propose Wisconsin-style restrictions on collective bargaining or ban the union shop, he acknowledges, “but that doesn’t mean it can’t happen.”

“You don’t know what would happen in a convention,” says NYSUT’s Korn.

The current state constitution guarantees that pensions “can’t be diminished” once workers have earned them, the CSEA notes. When laws with similar protections were eliminated or nullified in Rhode Island and Detroit, “pensions have been cut dramatically,” D’Amico says.

“Their pension could go down from what it was to 50% or less,” a police officer says in a video produced by the Nassau County PBA. “It’s happened in Rhode Island and it could happen here in New York.”

Another target might be the civil-service system, D’Amico adds. A lot of people, he explains, would like to “run the city and state like a corporation and hire and fire at will.”

Constitutional-convention scholar J.H. Snider, writing in a City and State forum Oct. 25, dismissed these claims as “swiftboating,” referring to the disinformation campaign to undermine 2004 Democratic presidential candidate John Kerry’s record as a decorated Vietnam War veteran. But he listed pensions as one of the “unpopular policies” opposition groups want to protect rather than debate. The New York City official voter guide also cites the need for “flexibility” to reduce “the growing burdens of our public pension system” as one argument for voting yes.

Opponents also argue that the state Senate districts from which delegates will be elected are heavily gerrymandered to favor Republicans. “The system is rigged. The selection of delegates is rigged,” DC 37 President Henry Garrido declares in a video the union produced.

“It may be the ‘1 percent convention,’” Communications Workers of America Local 1180 President Arthur Cheliotes wrote in City and State Oct. 25. “The last time a constitutional convention was convened, in 1967, four out of five delegates were career politicians, judges and other politically connected individuals. One was a farmer. That was decades before Citizens United.”

Another argument opponents use is the convention’s possible cost. The League of Women Voters, which supports the convention, has estimated it as $50 to $108 million. What would it mean to spend that amount on “health-care facilities, mental-health facilities, transportation, roads, bridges, infrastructure, education,” state AFL-CIO President Mario Cilento asks in the DC 37 video.

Polls have showed New Yorkers favoring the convention by a narrowing margin, with most respondents not very aware of it. A Baruch College poll released Oct. 23 found 32% for and 27% against—while 56% hadn’t read or heard anything about it. In a Siena College survey of registered voters that came out Oct. 6, respondents said they would vote “yes” by a 44%-39% margin, down from 45%-33% in September. Voters from union households were much more likely to be opposed.

That means motivating union members to go to the back side of the ballot and vote no might make the difference. “If union households come out to vote in the number that we need,” D’Amico says, “we’re going to win.”