High unemployment, stagnant wages, bipartisan bickering blocking more stimulus dollars for job creation and the very wealthy earning more and paying less are just some of the issues that galvanized the City’s unions to march along Broadway from Herald Square to Union Square on December 1. Members from multiple unions, such as SEIU 32BJ, DC 37, Teamster Locals 282 and 814, IBEW and UFT, as well as students and community- and faith-based organizations, made up the diverse assembly.

According to Vinny Alvarez, President of the New York Central Labor Council, the council called for the march not just for the labor movement, but for everybody frustrated by the staggering rise in income inequality.

“The economic policies of the past 30 years have caused the current situation where we have 20 percent of the population owning 85 percent of the country’s wealth,” said Alvarez. 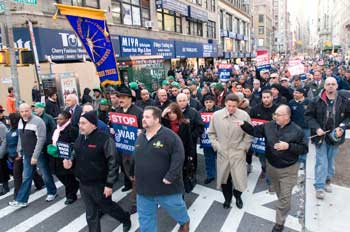 While President Obama’s American Jobs Act by itself will probably not help to narrow the income inequality gap, Alvarez said that passing the act is one economic policy that “will go a long way in creating jobs in transportation, education and rebuilding new infrastructure.”

Alvarez also said the march and its message are directed to both the business community and the halls of Congress. “We need solutions to fix our economic problems.” He hopes that, if businesses invest and Congress can somehow agree on an economic agenda, that funding and investments will be “applied fairly and proportionately to ensure a broad-based economic expansion.”

UFT’s President, Michael Mulgrew, said the labor movement, however, can’t wait for Congress to act. “Labor has to roll up its sleeves to figure things out.” He’s spoken with Governor Andrew Cuomo on how the state’s different stakeholders can work together because help from Washington is not visible on the horizon.

“It’s tough stuff, trying to get unions, business leaders and elected officials to work together, but we can’t afford another year of cuts because we’re already cut to the bone.” As a result of the cuts, the average class size for first graders is 30, “the highest average since 1978,” noted Mulgrew.

Bob Masters, CWA District 1 Legislative and Political Director, said Cuomo is a brilliant leader of the popular move because, in response to Occupy Wall Street and city unions demanding the wealthy cough up, he recently announced a possible tax on the very wealthy.

For Masters, the march signifies a particular outcome. “We face a stark choice of tax cuts for the 1 percent or jobs for the 99 percent.”

John Samuelsen, TWU Local 100’s President, said the march’s broad union participation is the result of the mobilizations of the past few months. “We’re starting to see the birth pangs of a new movement to advocate and fight for working families. The powers that be are starting to understand the power of this movement.”

Henry Garrido, DC 37’s Associate Director, said the march is a very important action to take for jobs and for the City’s unions to demonstrate a unified front. While organizing one of the biggest union marches in a long time, outside of Labor Day, is a challenge, the bigger challenge yet may be how the city’s diverse unions maintain their unified front.

“Different unions have different ideas on how to create jobs. Some want infrastructure spending, while others want spending elsewhere. But the City’s unions need to maintain a strong and unified message on one item: No more depleting our pensions and benefits,” said Garrido.

Mike Fishman, President of SEIU 32BJ, said the march is the type of action required to fix the economy, and also to mobilize his members as they face the possibility of entering the New Year without a new contract. With about 6,000 members participating, one of the biggest contingents in the march, Fishman said 5,000 members walked 20 blocks from the Sheraton Hotel after granting 32BJ’s bargaining committee the authorization to call for a strike as their employer, the Realty Advisory Board (RAB), submitted “aggressive proposals our members didn’t like.”