The Affordable Health Care Act is two years old, and recently the Department of Health and Human Resources produced a report showing how the reforms enacted will save Americans enrolled in traditional Medicare about $3,500 over the next 10 years. But Local One of the International Alliance of Theatrical Stage Employees believes a single-payer health care system is the only system that will stem rising health care costs.

Robert Score, Local One’s Recording Corresponding Secretary, noted that the national union passed a resolution in support of the HR 676 bill for a single-payer system introduced by Senator John Conyers (D-MI) at its national convention several years ago. Then in Florida at another convention another resolution for supporting single-payer signed by 76 IATSE locals was unanimously passed.

Score acknowledged that the 3,100 members of Local One are the lucky ones because they receive relatively good and affordable healthcare for themselves and their family members. But the union is fighting for single-payer because, according to Score, the current system is unsustainable, in spite of Obama’s signature domestic program.

“Our members are in a fortunate position, but the vast majority of Americans are not. Local One is not fighting for single-payer just for Local One’s benefit, but for the entire county because rising health care costs are placing the country down the road of disaster,” said Score. 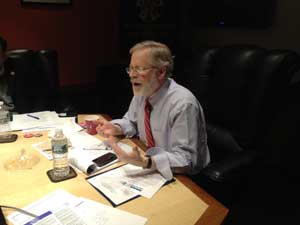 Back in January, Local One, along with other participants, held a strategy discussion on single payer. Assemblymember Robert Gottfried attended, and Score noted that Local One has been working feverishly with Gottfried to bring Gottfried’s Assembly Bill 7860 and Senator Thomas Duane’s Senate Bill 5425 onto the docket to enact the New York State Health Plan, “a comprehensive system of access to health insurance for NY State residents.”

A Communications Worker of America representative participated, as well as Marco Carrion, Political/Legislative Director for the NYC Central Labor Council. While other notable and larger-sized unions were not in attendance at the January discussion, Carrion’s participation represents the opportunity for the CLC to coordinate efforts with the city’s other unions to explore and implement strategies to bring single-payer to New York.

Another way Local One is working towards single-payer outside the State Legislature is providing financial support for three different organizations whose common aim is to replace the existing for-profit private system with a national system where every single American has coverage.

According to the Labor Campaign for Single Payer HealthCare, “No union today can bargain without facing a demand or hard choices on health care coverage in our contracts. The absence of a national health care system significantly depresses our members’ wages despite the productivity gains their work produces.”

Healthcare-Now NYC and Physicians for a National Health Program (a non-profit research and education organization of 18,000 physicians, medical students and health professionals who support single-payer national health insurance) also receive financial support from Local One whose members overwhelmingly approve the expenditures each time they come up for discussion, according to Score.