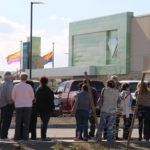 owned by Native American tribes died on the Senate floor Apr. 16, when a vote to forestall a Democratic filibuster fell five votes short of the 60 needed.

The Senate voted 55-41 for cloture on the Tribal Labor Sovereignty Act, which would have exempted tribally owned and operated enterprises located on Indian land from the National Labor Relations Act.

Supporters of the bill framed it as giving Native American tribes the same recognition as state and local governments, who are exempt from the NLRA. Opponents called it a way to deny basic labor rights to an estimated 600,000 workers, primarily at tribally owned casinos.

“This bill was never about Native Americans, who have a crucial place in American life, culture, and history,” UNITE HERE President D. Taylor said in a statement. “Rather, it was designed by multimillion-dollar gaming-industry bosses as a staggering attack on the most basic labor protections all American workers are entitled to under federal law.” UNITE HERE represents 100,000 workers in the gaming industry, a large part of them at tribally owned casinos.

The Tribal Labor Sovereignty Act was first introduced in 2015 by Sen. Jerry Moran (R-Kan.). The House passed the current version, sponsored by Rep. Todd Rokita (R-Ind.) by a 239-173 vote in January. The Senate cloture vote went largely along party lines, except for Rob Portman (R-Ohio), who voted no, and seven Democrats who voted yes: Tammy Baldwin of Wisconsin, Heidi Heitkamp of North Dakota, Jon Tester of Montana, Martin Heinrich and Tom Udall of New Mexico, and Tim Kaine of Virginia and Mark Warner of Virginia.

Udall said during debate Apr. 16 that this was the first time in 10 years that a bill from the Committee on Indian Affairs had been discussed on the Senate floor, while legislation on “pressing issues like homelessness, language loss, and economic development” had languished without action for up to 15 years. Majority Leader Mitch McConnell (R-Ky.), he charged, had limited consideration to one issue “chosen specifically to amplify partisan rancor.”

Communications Workers of America legislative director Shane Larson told LaborPress it was “really disappointing” that Democrats would support a bill to roll back collective-bargaining rights, particularly in the current political environment. Taylor threatened in January that UNITE HERE would withhold support from any House member who voted for it.

Moran and his “leadership PAC,” according to OpenSecrets.org, have received $206,800 so far in the 2017-18 election cycle from individuals and political-action committees in the casino/gaming industry. UNITE HERE had given $175,000 to House Democrats as of Jan. 8, according to Bloomberg News.

The bill would have reversed a 2004 National Labor Relations Board ruling involving the San Manuel Indian Casino in San Bernardino, Calif., where CWA-organized workers won their first contract in 2000. The board held that Indian tribes should not be exempt from the NLRA for work that is “commercial in nature” rather than “governmental,” such as the operation of a casino that “employs significant numbers of non-Indians” and “caters to a non-Indian clientele.” The federal D.C. Circuit Court of Appeals upheld that ruling in 2007.

Since that decision, a group of more than 160 Indian tribal nations, tribal corporations, and tribal trade associations wrote to the House in January, “the NLRB has been aggressively asserting jurisdiction over tribal labor practices when it determines tribal government employers are acting in a ‘commercial’ rather than a ‘governmental’ capacity—an analysis it does not apply to state or local government employers.” The Tribal Labor Sovereignty Act, they added, “builds upon a principle that has been amply demonstrated by Indian tribes across the country: When tribal sovereignty is respected and acknowledged, economic success follows.”

The signers included the Mashantucket Pequot Tribal Nation, which owns the Foxwoods Resort Casino in Connecticut; the Mohegan Tribe of Connecticut, which owns Mohegan Sun; the National Congress of American Indians and the National Indian Gaming Association; and the Shinnecock Indian Nation on Long Island, which has proposed building casinos in the Hamptons and at Aqueduct.

“Since that decision, the NLRB has aggressively asserted jurisdiction over tribal labor practices when the Board determines tribal government employers are acting in a ‘commercial’ rather than a ‘governmental’ capacity—an analysis it does not apply to federal, state, or local government employers,” the Chamber of Commerce wrote to Senate members Apr. 16, warning that it would include votes on the bill in its annual scorecard. “TLSA builds upon a demonstrably successful principle: Where tribal sovereignty is vigorously exercised, economic success follows.”

“This bill isn’t about tribal sovereignty,” Larson says. “It’s purely a Chamber of Commerce-driven assault. It’s yet another way where they can take away unions’ powers.”

The CWA has largely abandoned organizing gaming workers, he says, leaving that field to UNITE HERE, the United Auto Workers, and others, but made the bill a political priority to stop an “unprecedented assault on all forms of workers’ rights.”

The argument that other government employers are also exempt from the NLRA is invalid, Larson argues, because most casino workers are not tribal members. State-government workers, he says, can lobby for collective-bargaining rights, and vote for or against elected officials on that issue, but tribal employees who are not members “have no recourse.”

Meanwhile, 300 cleaners at Foxwoods are scheduled to vote Apr. 20 on whether to be represented by UNITE HERE. Mashantucket Pequot law authorizes calling an election when 30% of employees have signed union cards, less than the federal standard of 50%. Foxwoods workers told the Connecticut legislature’s Judiciary Committee in March that management has been holding numerous “captive-audience meetings” to propagandize against the union, from 45-minute one-on-one sessions to assemblies for entire shifts held in the casino’s theater.