Outsourcing of Jobs Continues Under Trump 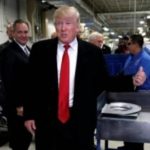 Dave Green, president of Local 1112 of the United Auto Workers, which represents workers at the General Motors plant in Lordstown, Ohio said, “More than 2,800 of my coworkers have been given pink slips under Trump’s watch.  But instead of punishing GM for sending jobs to Mexico, the president has awarded the company with $600 million in federal contracts.”

“I voted for Donald Trump because he promised to save jobs.  But my plant is moving to Mexico and he hasn’t stopped it,” added Randy Troyer, who’s worked 24 years at CTS in Elkhart, IN which is represented by IAM Local 2018.  “I’m 62 and worried about retirement. Who’s going to hire me at this age?”

“Verizon recently announced that it was closing a call center in Arkansas. In the past six years, they’ve closed 19 call centers across the country — impacting 11,000 workers,” said Latasha French, a Verizon Call Center worker in Irving, Texas.

“It’s frustrating to know that our taxpayer dollars are supporting their offshoring,” said Brandon Kirnec, who works at an AT&T call center in Youngstown, Ohio.   “It’s outrageous that instead of punishing AT&T, Trump’s given the company more than $900 million in federal contracts.”

The Good Jobs Nation report includes research showing Trump has failed to deliver on his promise to punish corporations that ship good jobs overseas. Instead of cracking down on corporations that outsource American jobs, the Trump administration is rewarding them with billions of dollars in taxpayer-funded contracts.

1 thought on “Outsourcing of Jobs Continues Under Trump”